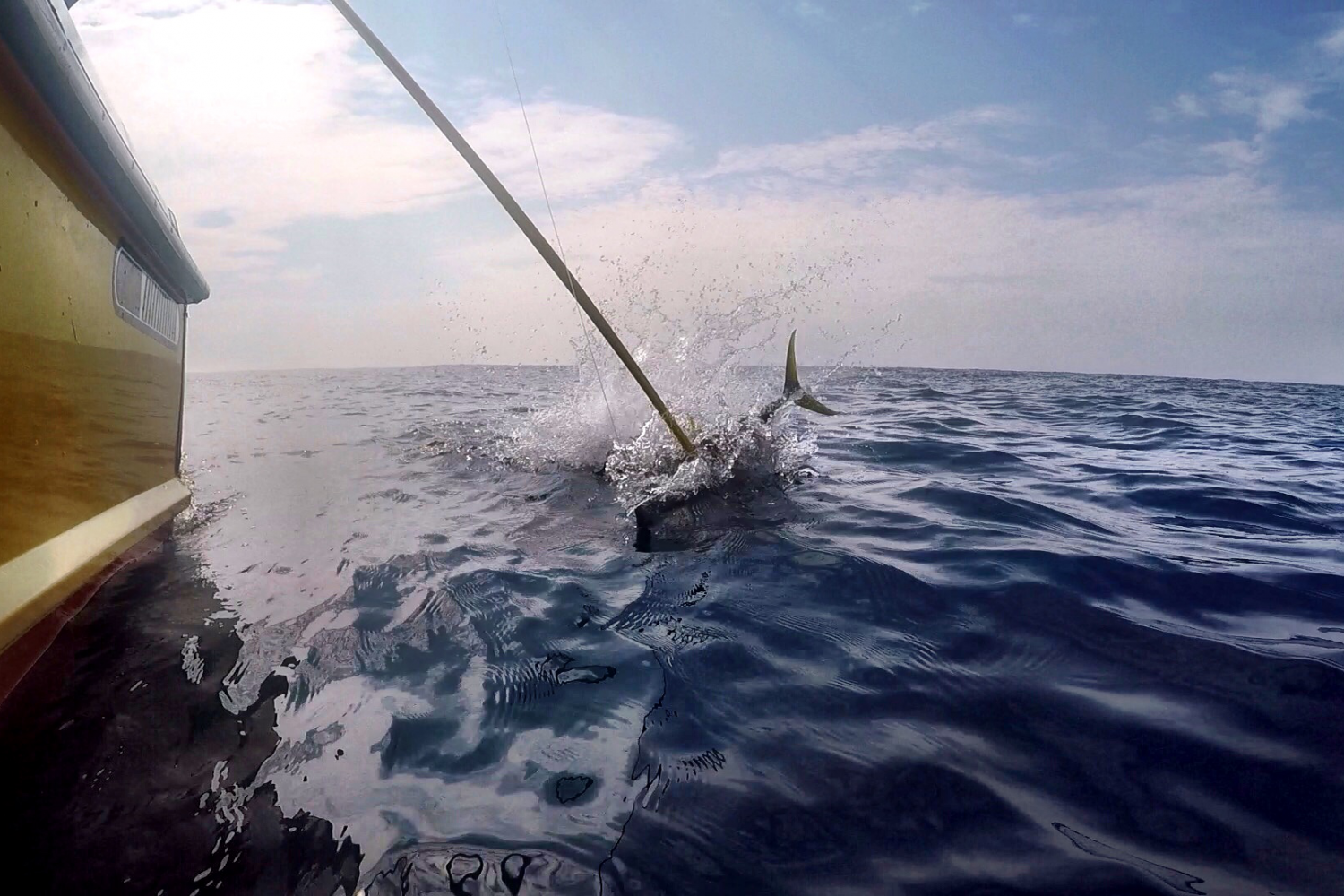 For most people outside of California, very few know Catalina. It’s a tourist spot 20 miles or so off the coast. If you’ve heard of it you either read my write-up of it here, or maybe you heard the name in the movie Step Brothers where they infamously make it to the “Catalina Wine Mixer.”

Regardless, it’s not very well known. And I make that point only to say that even FEWER folks know about another gem out there in the Pacific: San Clemente Island. And it’s the bomb. (That’s actually a bit of a joke, which you’ll appreciate at the end of this).

I learned about San Clemente back when I used to work on fishing boats. Every once in awhile, we’d head out to San Clemente, which is barely even visible from the California coast. Maybe once a month you can see it out on the horizon, a tiny little smudge, but most of the time it’s invisible, 45 miles away.

We always had a great time fishing out there, but it was a trek to say the least. We had to take a cabin boat and almost always needed an overnight trip, which immediately reduced the number of people who were keen on participating. Not even the allure of great calico bass (sometimes called kelp bass), nor yellowtail or sheephead could draw some folks out for that kind of adventure. And many folks would prefer deeper water fishing, like tuna, rather than fishing at an island that’s so tough to get to.

But every so often we made it out there.

Being part of the boat crew sometimes meant staying awake through the night with the captain. For most deckhands, this created a situation upon arrival that presented a choice: either sleep in the morning and throughout most of the day, or fight the fatigue to stay awake and fish. I say “for most deckhands” because it was never a choice for me.

Yeah, I was fishing.

On one trip in particular, I had stayed up with the captain all night and was rewarded by mother nature for it. The sea was calm and flat, and the stars lit up the sky like millions of torches, burning and dancing while the boat rocked gently beneath our feet. It was 2 o’clock in the morning or so, and I remember these dolphins out in the water coming up and swimming around in the light of our boat.

I just stood at the front and gaped in total awe. There were hundreds of dolphins, bathed in the eerie glow of our little boat, jumping and leaping in swift, powerful flight. The stars seemed to melt at times into their own reflection on the water, and it seemed as if the dolphins were leaping from the water only to splash back into the night sky.  I felt so small yet so connected, like an atom in the bigger picture of the universe. It was beyond humbling.

And even more humbling was how small I felt 30 minutes later when I ended up getting seasick. For me, nausea is a rarity in general, and even more so when I’m out on the water. That’s my element; that’s where I feel at home. But on this night, of all nights, I felt humiliated. The sea was flat, calm, and totally mild. Sure, the only other time I got seasick I was 12 years old in Kodiak, Alaska, being pitched and hurled about on 20 foot swells, but this was just embarrassing.

But when life throws adversity your way, you rally as best you can. So that’s what I did.

It was 5:00 by the time we got to the fishing grounds, and the captain asked me, rather nicely considering my embarrassment and sickness, if I would rather go to bed or fish. He didn’t say it in a patronizing way, but there was no universe I was going to go to bed. I fished.

And caught a ton of yellowtail.

And caught a ton of calico bass.

It was incredible, especially considering the seasickness I’d been fighting off. But I couldn’t fight it forever, and the whole ordeal began to catch up to me.

By 2:00, after 7 hours or so out fishing, I was feeling beat. I was ragged, nauseated, and just plain weary. Typically, we would begin to head back around 3:00 anyways, but our trip got cut an hour short. Sirens pierced the air. Everyone leaped, even those of us who understood.

San Clemente island is owned by the state, and they use it as a testing site for large ordinance. AKA bombs. That piercing siren was a simple message to anyone in the area: evacuate the perimeter, get away, (seriously, freaking go).

As we began to evacuate, I felt the siren pierce through the layers of weariness, and suddenly all I wished for was a bed and some shut-eye.  In the distance, dwindling behind us, we could hear the beginnings of explosions, rising in pace and volume like rolling thunder. And San Clemente disappeared back to the horizon, though I felt like I could still feel the explosions rippling through the air and ricocheting around between my ribs.

And despite this, sleep was not in my fortune, not yet at least. I was relatively newer to the boat crew, and I had made my choice to fish rather than sleep. That meant it was my shift again. The old expression “you made your bed, now sleep in it” feels painfully ironic thinking back to that day as I lived with my decisions.

But I’m stubborn and a little crazy for fishing, so if I could do it all again I’d pick the same things. I would still choose to fish, knowing that on the way back I would be the one standing on deck, weary and sick, tossing sardines out into the water, just for the hell of it, just for the entertainment of the passengers and crew. I wouldn’t dream of calling it “hazing,” per se, but to be clear I was tossing sardines into the water and no one was actually fishing at that point .

Chalk it up to character building, I was a high school guy among men, and these memories are forever a part of my journey. Like I said, I wouldn’t change a thing. If you ever have the chance to get out to San Clemente, take my experience as a mixed review. We had some phenomenal success fishing, but it is certainly a trek. And the island itself? I told you it was the bomb. Just not the way you might have assumed. I’d stick to the water.