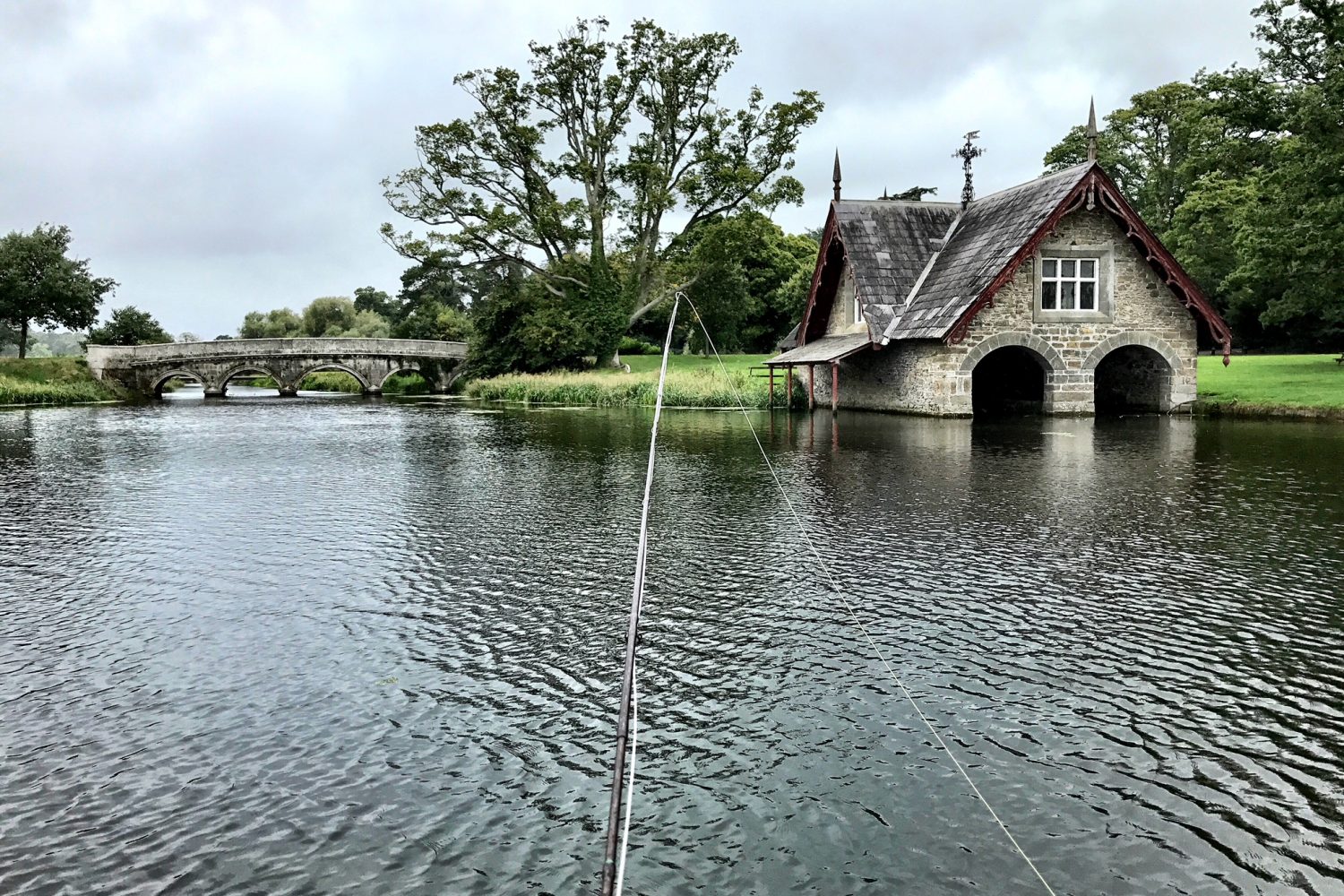 Ah, Dublin. There’s something special about Ireland, home to leprechauns, the Blarney Stone, and Saint James Gate — the brewery that, through some kind of magic, somehow produces one of the finest beers in the world: Guinness. Somewhere much lower on the list of things Ireland is famous for is pike, brown trout, and salmon. But rest assured if there’s water around, I’ll find it. And I’ll fish it.

One of the common misconceptions for visitors to Dublin is that the River Liffey, which flows into the city from the west, is a key component in the making of Guinness as it passes by Saint James Gate on the way to Dublin Bay. Rest assured, it is not. I was surprised how dirty the water was, even out in the country where we fished, but the dirty water of the Liffey does not make it into that dark, creamy pint of goodness, which is brewed instead with pure water from the Wicklow Mountains to the south (which, incidentally, can be seen from the 360-degree panoramic view in the tap room atop the Guinness Storehouse).

But we weren’t in Dublin to drink Guinness, or at least, not only to drink Guinness. Ireland is better known for its breathtaking scenery, rolling hills and mountains, and unique wonders like the Cliffs of Moher, Ring of Kerry, and Giant’s Causeway (technically, Northern Ireland, I know), but anyone who knows me knows that I’m always looking for any excuse to fish. And I found one.

My wife and I were traveling for a wedding, but we had an extra half day or so in our schedule before our train left Dublin to carry us on our way. Just enough time to get out and explore the waters of the River Liffey. So we hired a guide, clambered into his little hatchback with our gear, and set off!

Most travelers will pretty much only see the slightly dark, dirty water of the Liffey as it flows through the heart of Dublin, but outside of the city it kind of breaks free of the city trappings. As we clattered along the skinny country roads, the Liffey grew a little wilder, meandering through fields of cattle and waving long-stemmed grasses along the lush countryside dotted with gnarled trees probably older than the mountains themselves.

Our guide, too, seemed to have stepped right out of ancient Irish lore, with a deep, heavy accent and bushy red beard twitching on his jaw as he pointed out some of his favorite spots. He had fish stories for days, I could tell, and he ended up being one of the nicest, most genuine people I’ve had the pleasure to meet.

The first spot we stopped was a little bend where the Liffey sort of backed up on itself, forming a kind of mini lake. The brush gave way to a little natural launch site, smooth rocks and gravel in front of this quaint, indescribable little lake house. You could see how each stone had been carefully set in place, built up by hand when construction was a raw art. There was a simple, surreal harmony to it, set next to the slow moving waters of the Liffey, and within a little indent in the outer wall was a space for his boat.

We put out into the center of the river and, for the first time ever, I had the opportunity to fly fish for pike — and I had a fair piece of luck! If you’ve never fished for pike, they’re freshwater predators, fairly big suckers with pointed snouts and wicked sharp teeth. Fishing can definitely feel like a competition, you versus the fish, but it really felt like another level with the pike. I caught one pike and nearly had a few others.

After rowing around a bit more, my goal was to snag at least one brown trout, but as luck would have it, it was my wife instead who beat me to it, pulling up a little brown just out of the shallows! She was so excited, and I felt grateful to the guide, the Liffey, and the day for all coming together to make such an experience for my wife. I truly am blessed to be able to do what I love, and for her to come out and have such a memorable time made it all incredibly special.

At the end of the day, I knew Ireland wasn’t famous for its fish, and our time out on the water really wasn’t about that anyways. We were fishing, sure, but we were talking and sharing stories about family, our friends and travels, and the things that really matter most. For large chunks of time we were just awestruck, taking in the scenery.

It was a little bit cold, with a crisp quality to the air that snaps the natural beauty into really sharp focus. A cynic or an urbanite could look at the hills and mountains as nothing special, but there’s a vastness and ancient quality to them that’s somehow reassuring, or almost holy. To sit and take them in, you feel something inside you growing too, sort of reaching out and connecting with the earth. It’s a feeling I won’t ever forget.

That said, the fish are never far from my mind, and I damn near had to be dragged away from the river. We were hiking back up, making quick time because we were in danger of missing our train, when I took one last look back over the Liffey. From thirty feet up on the embankment, I could see through the flowing waters and glimpsed a massive pike just sitting there, a full 34, maybe 35 inches. It was as if he was watching me go, and I was itching to go back down and there to go after him.

In some ways, that big pike at the end of the trip is a perfect metaphor for what we do, day in and day out. After an incredible day, he was a reminder of something at once from the ancient past and distant future, prehistoric but timeless. He’s still out there, lurking, an embodiment of something we believe to exist whether we’ve seen it with our eyes or not. For me, it’s just a little flame deep inside, burning with hope that our paths will cross again. Another adventure for another time.