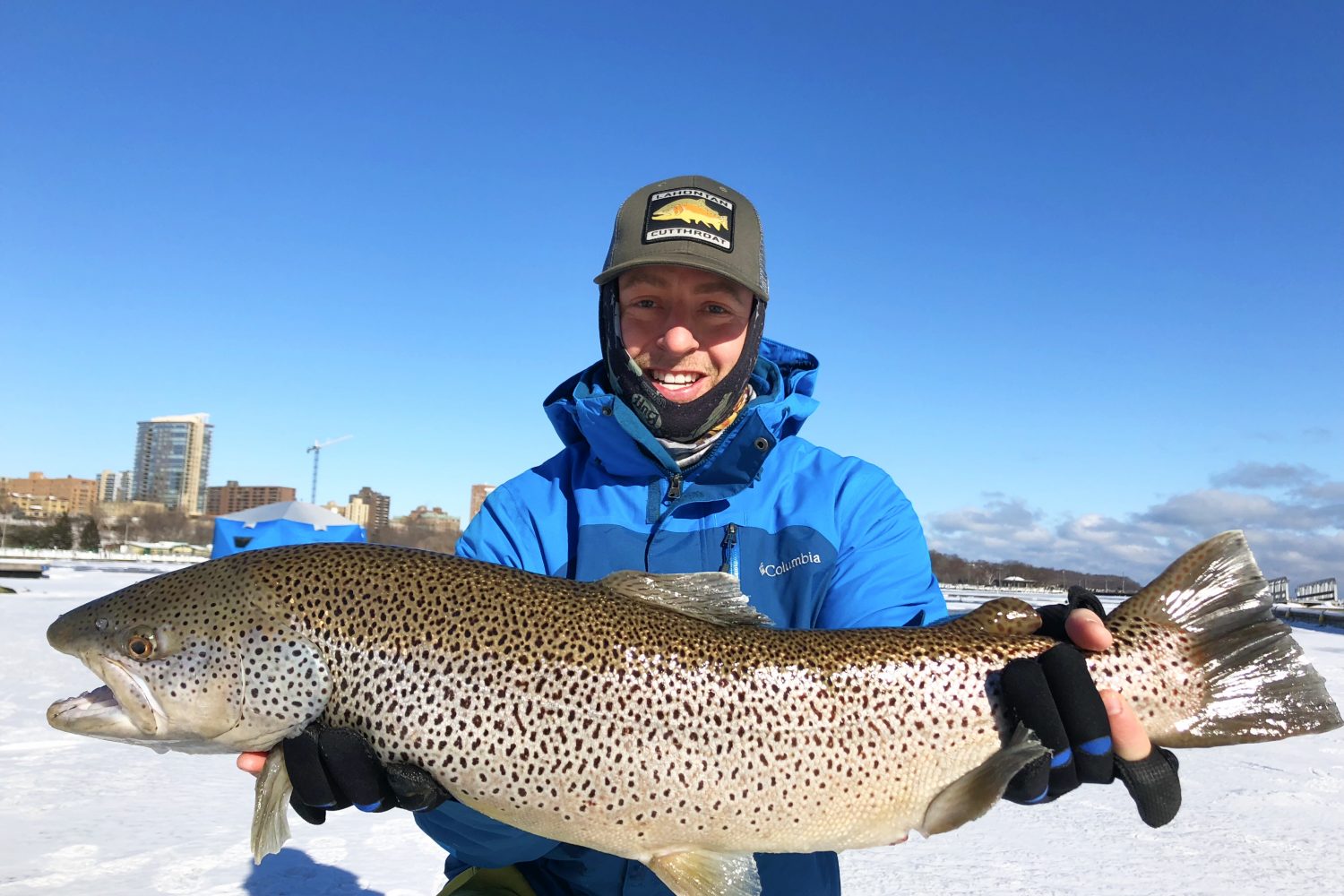 A Triumphant(?) Return to Ice Fishing and Big Brown Trout

Okay, I have to say it right up front: this was a fun one. But not necessarily for the reasons you’d expect. Of course ice fishing for massive brown trout is a guaranteed great time, but I get even more joy when I’m able to spread the love of fishing and pass it on to others. That’s half the reason I’m out here doing what I do.

At least, that’s the reason I share my stories. My motivations to be out in nature enjoying a good fishing trip are maybe slightly more selfish. But months and months ago when I first made it out onto the ice in Milwaukee, a few of my buddies saw my posts on Instagram. They immediately wanted in. They immediately said, “Chris, you’ve gotta plan something. Make it happen.”

So that’s what I did. I made it happen.

Luckily I’m an expert in logistics, and luckily I know the right folks. My mind immediately went to Eric, the guy in Milwaukee I worked with the first time. He basically said to let him know a date that worked for us, and we’d get it all set up.

Traditionally, ice-fishing season there is December through mid-February. Since that’s all the guys were talking about and all they wanted to do, we figured January would be a safe bet, smack in the middle of that window.

As most of you reading probably know, the winter bridging 2018 into 2019 was unseasonably warm throughout much of the country. Milwaukee, too. Which meant that our ambitions of ice-fishing were in serious jeopardy.

But we’d already planned the trip, so we crossed our fingers and made the journey. My buddies flew in from San Francisco, and I flew from the Orange County area. It was a Thursday, around 3:00 in the afternoon, and the trip started out just as you’d expect it would…

…we met at the bar and got a little rowdy for a few hours, catching up and having fun! The wave of excitement on the front-end of a trip, finally making it after all the built-up anticipation. It’s a wild feeling.

We finally left the bar to get some dinner, at some unknown hour, when we realized we were in the middle of an insane snow storm. A blizzard. The sun had been shining just hours before, and now the snow whipped through the air, almost a full white-out. We were stunned. And then we got the surge of adrenaline as we realized this almost guaranteed we’d be able to ice-fish.

And confirming our hopes, I got a call from the guide just a little while later.

“Good news,” he told me, “the Coast Guard issued approval for tomorrow. It’ll be the first day of the season to ice-fish. See you at 7:00.”

Somehow, by luck and the grace of God, we’d timed it perfectly.

Hair of the Dog & Back Onto the Ice

Morning came early, but fortunately I knew exactly where to go.

As I struggled out of bed and began pulling together my clothes and layers for warmth, I couldn’t help but grin thinking about the night before. Of course, the good news didn’t slow down our drinking in the slightest — if anything, it amped it up. We had a blast, staying up ‘til about 3:00 am, celebrating and goofing off.

So when 6:00 came three hours later, it felt like the blink of an eye. We were groggy to say the least.

Luckily we’d packed a handle of Makers Mark to get through the morning, and it came in handy. We showed up to the harbor still yawning, still a little delirious in the gray pre-dawn light. But as we crossed the ice and made it to our tent, it became quickly apparent within seconds that the ice below our feet was not very thick. The locals might be used to it, but I’m talking about 2” of ice separating us from over 15’ of water, dark and frigid below our boots.

We’re Cali boys, and we don’t know ice as well as the locals, but we can do basic math well enough to be a little squeamish about it.

And that’s the beauty of working with a guide. We put our fate in his hands and gave up the responsibility to make hard decisions. In other words, we shut up and decided to go with the flow. He said it was alright, so it was alright with us. After a little Makers, it was even better.

I mention all the time how every trip carries high expectations, even when we don’t want it to. Every cast, every tug on the line is a chance for an absolute monster and a glorious fight. So when we hooked something within the first five minutes, we were practically jumping up and down. When we hauled it in and saw a tiny little one, we laughed and laughed.

It was hilarious, sure, but it just added fuel to that fire inside, hoping for something much, much bigger. And we settled in to wait for it.

Outside the tent, the wind was howling, storming like crazy. We just sat there huddled up, passing the bottle of Makers around. Next thing we realize, it had been about 7 hours.

We only really caught one large fish through it all. Thankfully, my buddy caught it. And thankfully, it was hilarious, too.It got hooked down the way by another tent, and my buddy went running after it.

Side note (and a running theme here): we are California boys. Keep that in mind.

My buddy was racing across the ice, slipping and sliding and flailing as he rushed to get this fish under control, and like a cartoon he proceeded to slip and fall right on his tailbone. Then, rushing to help and sprinting closely behind him, my other buddy also fell, sort of crashing down into the ice and sliding right up next to each other.

Coming off of knee surgery, I was walking gingerly like an old man, and I ended up passing them, writhing in pain and moaning there on the ice. I’d pay good money to see that whole scene on YouTube, if any locals in Milwaukee happened to catch it on film from another tent!

When they fell, the rod skittered away across the ice, and they scrambled to get back after it, only to slip and fall again! It was like the tortoise and the hare, me gingerly overtaking them; the two of them trying to sprint and falling down. And as the fable goes, I ended up getting the rod first. When they caught up, I handed it back to my buddy. It was his, and it meant a lot to me to give him that same experience I’d had before. And it was awesome — a large steelhead. Great size and just overall a beautiful fish for him.

We continued to drink, putting a serious dent in the bottle of Makers. As the day went on, we realized the ice was somehow getting even thinner. With makeshift heaters in the huts, all the warmth was sort of combating the stormy cold we needed to keep the ice thick. Our nerves were already rattled anyways, so around 3:00 we called it a day.

Off the ice, I told the guys I was heading back to watch the basketball game I wanted to watch, have a nice little dinner, and call it a night. A nice early bedtime so I’d be refreshed for the next day.

But my two buddies are great guys and true party animals, and they badgered me nonstop as we headed back. After all, how often are we together like that? So we decided to compromise. We’d watch the game together…at the casino.

And Lady Luck came with us.

One of my buddies ended up winning a couple thousand dollars on the tables, and that was all the excuse he needed to stay up all night, again. We went out to a nice dinner, and I proceeded to go to bed around 8 as planned, despite the incredible peer pressure.

But they kept it going! I figured they’d run out of steam after a couple hours. So when 6:30 came around again, I woke up expecting they’d be there and somewhat rested, if only a little groggy. I went to their room and knocked, didn’t hear anything.

Knocked again, nothing. Again. Nothing.

When I knocked a fourth time, one of them finally answered. As soon as the door opened, it was clear as day he was still intoxicated — I wondered if he’d even gotten home 30 minutes before. My other buddy was already out cold like a hibernating bear. You couldn’t even move him, push him, or yell at him loud enough to make him flinch.

I realized I would be fishing by myself.

Truth be told, I wasn’t too excited to get back out there, given how bad it was the day before. And maybe the poor showing on the first day had justified my buddies’ decision to party hard and give up on the fishing dream. But just as Lady Luck rewarded the party animal spirit of my buddy at the casino, the fishing gods rewarded me for my determination.

Out there on Day 2 I caught not one, not two, but EIGHT huge trout through the ice. It was a fantastic day, and the storms overnight + freezing temperatures had brought another 3-4″ of fresh ice to dispel any nerves like we’d had the first day.

Huge fish after huge fish later, I spent the day with Eric and his son Cal, two great guys. We just swapped stories and enjoyed the day, laughing at the thought of my buddies back in their hotel room trying to recover from their festivities.

Those guys woke up around 1:00 in the afternoon I think. I was honestly surprised to see them alive and functioning, and  I made sure they had a picture of every great catch I’d made. They were a little sore about it, but I think they were also still sobering up.

We met for a late lunch around 3:00, and I couldn’t believe my eyes. They were going after it again. Talk about resilience! But it wasn’t meant to last. After three hours of drinking and me telling fish stories, they hit a wall pretty fast. It all caught up to them by dinner, and they had to drag themselves back to the hotel.

In the end, the trip ended up being exactly what it was destined to be. I have a lot of great friends who see the posts on Instagram and hear the stories of amazing fish, and they want a taste of it without really thinking about the long hours and slow days I go through, too, to make the great days possible. But they made the most of their trip, and it was a blast for everyone.

Plans change, and we went with the flow of it. I do wish they’d come out on the second day to experience the big browns I caught, but who knows — maybe if they’d come, we wouldn’t have caught anything again. Life is funny like that. But the one thing it means for sure is this: at some point, we’ll just have to plan another trip, and do it all again.