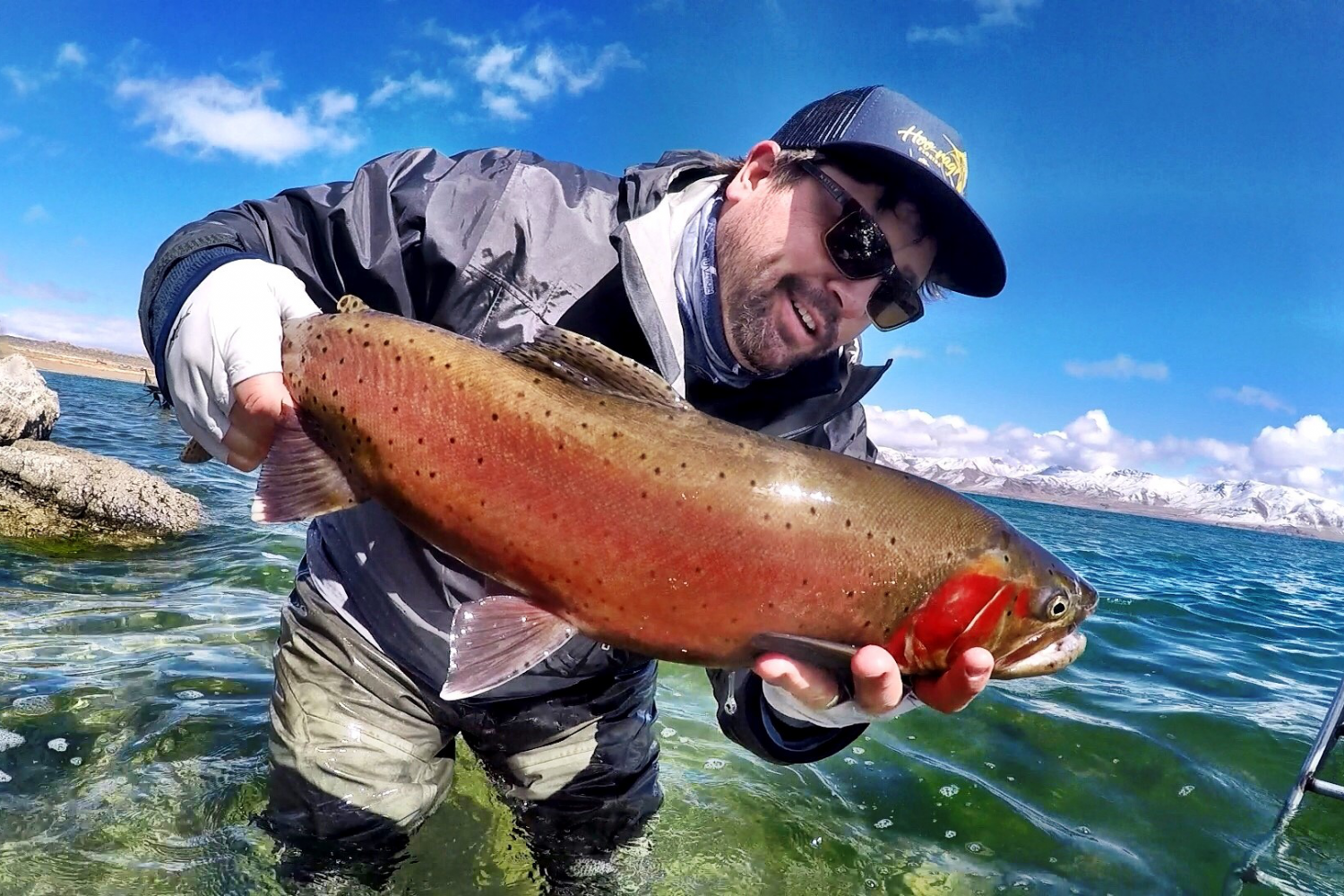 The Native American people are some of the greatest storytellers. Their spirits are tied to the land, the plants, and the animals in a communal harmony. Some say this is how they pass on stories so well. In Native American lore, spirits live on in many ways, and I know this to be true from my time spent on Pyramid Lake out in Nevada, where I forged a deep connection with two fish that were never mine to have. That connection haunts me to this day.

In all seriousness, Pyramid Lake is jewel, a natural lake out in this sweeping reservation that’s known for it’s cutthroat trout, specifically a subspecies called Lahontan. I’d done some research before the trip, and I knew these Lahontan could easily grow up to 20 or 30 pounds, if not more. When you hear a stat like that, you get the itch to see it for yourself.

So I took a few days off of work and invited a couple of my buddies out to Pyramid Lake, just outside of Reno. Here’s the gist of our conversation:

“Do you like having some beers and catching up with old friends?” I asked.

“Do you like catching them from a tiny perch on a ladder out in the water?”

That’s right. One of the most unique things about fishing Pyramid Lake is the perch. They have these nice big ladders that you take out into the water, usually about 5 feet of water or so, off an embankment or other drop off. You just cast from these ladders all day long. It’s insane, so of course my buddies and I were immediately all in for it.

Except for one thing. We got a little too drunk the first night. Nothing crazy or reckless, just the good old boys getting back together, guys being guys and all that. So the 4am wake up call to meet with our guide hurt. A lot. You could say we were feeling it.

We met him down at the lake by 4:30 still feeling the effects of the night before, a little fuzzy headed, a little sleepy-eyed, stumbling through the semi-darkness laughing in that giddy half-still-drunk delirium.

It felt like a dream. It was a crisp morning with a light breeze pushing ripples across the water that was otherwise still and smooth as black glass, and despite the temperature already being 50 degrees, there were white tufts of snow all around the banks. It was totally bizarre, and the further across the lake you looked into the distance, the more the white faded to a soft gray and blurred into the outline of snow capped mountains surrounding the lake. On the horizon was the faintest tinge of pinkish orange, and without that we may not have been able to tell where land ended and sky began.

We clambered out onto the ladders, out over the water, and made the first casts. Not even 4 minutes had passed when suddenly a guy three ladders down from us started reeling in like crazy, hauling and fighting while we all watched. The way he was yelling, you’d think he was being murdered down there, but really he’d just caught a 20 pound cutthroat almost immediately!

It was surreal to sit there on the water, feeling like I was in a waking dream, only to watch another angler catch the very fish I’d dreamed of catching! Was that my fate as well?  It was Inception for fisherman, a fish-ception I suppose, but what it really meant was: game on.

So we got busy fishing. The sun spilled over the horizon and bounced across the snow fields, splashing light across the water in dazzling, brilliant sparkles. The day wore on and we all hauled in more and more cutthroat — about 20 or so between us all. Of course, I caught the most (12), and I still like to remind my buddies about this, compared to the 8 they hauled in between the two of them. None of them were monsters, though, maybe 4-5 lbs each. It was still a blast.

And the good times carried on into the night. The laughs bubbled up, the drinks flowed, and…we got a little bit drunk. Just a little. Like a groundhog-day movie, we did the exact same thing all over again.

In our defense, there’s not much else to do around that area, and the Crosby Lodge where everyone stays is pretty much set up to feed and house fisherman and pour drinks when they return. The locals come down from the surrounding hills and countryside to share stories, drink up with the visitors, and slip away back into the night as if they’d never been there at all.

So the next morning, as groundhog day continued, we were up again before the sun and down by the water as the first rosy shades began to color the horizon. It was the same dream all over again, with the added bonus of a disorienting deja vu feeling. The only difference was, no one opened up the day with a big catch.

But we were determined to catch one for ourselves. I’m reluctant to admit it, but my buddy actually outfished me the second day, and even though we hauled in a fair amount, none were bigger than 5 or 6 pounds. One guy a few ladders down caught a 12 pounder, but nothing to spark our envy. It was another blast, and another day of memories, but also another small disappointment.

We left the next morning, and we actually ran into another one of my good friends as he was arriving. He’d spent some time over at the casino and decided he was up for a little fishing himself. We told him all about the conditions and the fish we’d caught, told him about the 20 pounder that was caught that first morning, and got him good and excited for his turn to try his luck.

Luck just about covers it. We couldn’t believe it, but the next day, by the time we landed in Orange County, we had a message from him. He’d done the same 4:30 wake up call, and hadn’t been out on the water long enough to appreciate a full sunrise before he caught a 24 lb. Lahontan. 24. It still hurts to think about.

In the spirit of the Native American cultures, I recognize that there is a spiritual connection we all have to the land and to each other. I think about this all the time when I’m out on my adventures, fishing out in the most beautiful places we’ve been blessed with on this earth….but no matter how hard I tried, I couldn’t be happy for him. I guess we were a little happy for him, maybe, but it was like seeing someone else live my own dream, all over again!

In that moment, then and there, we planned our next return trip to Pyramid Lake before we’d even left the airport. It’s a great jewel of a lake in its own right, just outside of Reno, but it’s personal now, too. I have unfinished business there, with the two fish that still haunt me to this day. Counting down already…