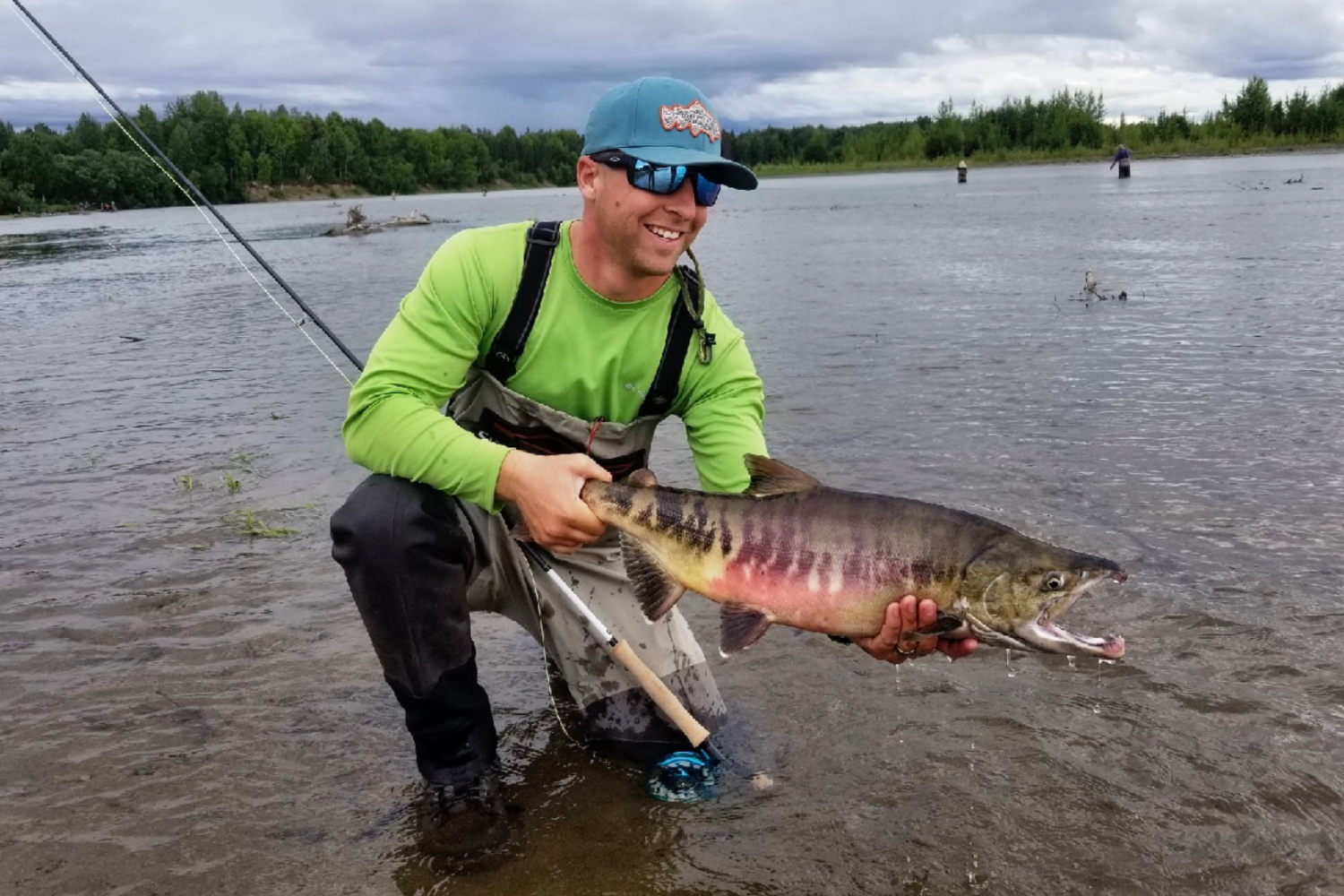 On the second half of my expedition to Alaska, I was blessed with the greatest fortune. My wife joined me! We ditched the guys made some plans to have a grand adventure of our own, up through the Denali National Park and Preserve.

Denali is a stunning expanse of over 6 million acres of tundra, glaciers, spruce forests, and more or less the heart of Alaskan wilderness. It can also claim the highest mountain peak in North America, over 20,000 feet high. It’s rugged and soothing, raw and divine. On one hand, it’s like living in a computer screen-saver, picturesque and pure, but no photograph could ever do justice to the rich greens of the grasslands and forest sprawling into the distance, or the meandering gray road that winds its way to a mountain range whose colors melt from pristine white at the tips through a kaleidoscope of blues and shimmering grays until it darkens at the base of the foothills. It’s almost obscenely beautiful.

We enjoyed the breathtaking beauty of Denali, but the real joy of this voyage was yet to come. On the way back, we left a day free to explore and drive back to Anchorage at our leisure, road-tripping Alaskan style. Fortunately, earlier in the trip, I’d met a guide who advised us to check out Montana Creek. He said it was on our way, off the road, easily accessible, and packed with Salmon. AKA — ideal.

So I penciled it in.

And it did not disappoint.

As we started turning off the road, my wife began to freak out just a little, thinking we’d run into some bears or something. She would be a sitting duck on the bank while I was oblivious out in the water, catching salmon and maybe some frostbite. No chance I’d let that happen!

What we didn’t expect was company, but there were quite a few other groups there at Montana Creek when we pulled up. There was a campground just off the road. We paid to park at the grounds and started walking down towards the river.

There was giant felled tree in the path we had to clamber over, like two little kids just having a big adventure, and we were still breathless and giggling when we came upon this great little spot. Funny enough, there already was an actual kid there, fishing away. We learned his name was Camden, and he was perhaps the friendliest kid ever. He became our guide for the day.

He said his dad was sleeping in the car but he was out here catching chum salmon, pink salmon, and hoping for a silver. He had such energy as a 10 year old, and I saw some of myself in him. The same passion, the same pure excitement. He then said, “Hey, take my spot. I’m going to get my dad and I’ll be back in 30 minutes.” Now, anglers are friendly enough as a general rule, but we can be very protective and territorial sometimes; it was a real humbling, beautiful moment the way he offered it up to me so solemnly.

So I took over. And I caught some pink salmon on the fly rod pretty quickly. It was pure joy.

My wife was reading on the bank, watching, when I saw a king salmon floating lazily up the river. Bright red, probably 20 lbs or so, and sticking out in the crystal clear water like a sore thumb.. I gave a little cast, but he wasn’t hitting my fly. I kept following him up river and my wife laughed at my persistence. But if there’s one thing I’ve learned, it’s to keep at it.

And about 50 yards upriver, I got him to hit. The fight was on!

For 20 minutes there in the cold, clear water, we went back and forth. I got him close a few times, but he kept the fight going. I suddenly realized I would need help to land him.

Now, my wife will go fishing sometimes but she doesn’t like touching fish and playing an active role that way. It killed me to ask her for a hand. But when I said, “Honey, can you grab his tail if I get him closer to shore?” She didn’t hesitate for a second! To my eternal pride and surprise, she pounced. She ran over and jumped on him, pinning him down to the bottom. She didn’t even have waders on!

Completely wet and grinning ear to ear, I looked at her in disbelief. She said it was such a big fish, she couldn’t even stop to question it — she knew what she’d needed to do!

I had never expected to catch a king salmon on a fly rod, but I’d certainly thought about it. I figured if I did, it would be a cherry on top of a stunning trip. And boy was it. We took some pictures and high-fived before sitting back for a minute, totally content. I’d set out and done more than I’d thought I would, set a goal and surpassed it. The reality of fishing is you’re disappointed a lot, rewarded a lot, but rarely content. In Alaska, I was.

Did I say content? When you’re fish-crazy, it only lasts so long before the itch comes back. Now I just needed a chum salmon. I had this goal in my head to get a nice male chum salmon, all colored up like a tiger — another cherry to match my king salmon cherry on top.

Our new buddy Camden came back down with his dad, and his dad was just as nice as the boy. We were fishing left and right while his dad chatted with my wife, and eventually Camden said, “Dad, I have a spot downriver. Do you mind if I take him?” I loved the confidence and adventure, but also I was stunned again by the integrity for him to want to share a secret spot with me. It’s an ego thing when anglers hoard secrets, but Camden stood there beaming and his proud dad said, “Of course not, why don’t we all go?”

So we went downriver a bit to where the creek connects to the larger river, and Camden ld me secretively that this was the best spot for chum. We started casting.

We caught a couple of female chum pretty quickly, these beautiful fish. But a few hours later, the day was winding down and I could tell the vibe was starting to drag. I’d caught my king and some pinks, and I was content to stop.

Content to stop, of course, means one more ‘last cast’ (and one more if needed). it’s hard to get a fisherman off the water.

And suddenly it happened. I hooked a big male chum. I could see the tiger marks through the clear water, and my fingers started tingling with that magical excitement.

For 15 minutes we fought, and as I got him closer to shore my wife came running in again. I hadn’t even asked, but she was back in the water yelling again about how huge this fish was. It had to be about 16 lbs, all colored up tiger-like, just like I had dreamed. We got him.

Again, we took a bunch of pictures, all commemorating our journey together, a dream come  true, and a stunning Alaska backdrop. Like I said, you aren’t often totally fulfilled, and that almost never happens twice, but that’s Alaska for you.

It never ceases to amaze me. I would go back over and over again, Camden and his dad Mike ended up sending us some smoked salmon. They’re the best people. and that’s what fishing is about, bringing people together, making memories and living out new stories while bridging relationships.

Well, fishing’s also about great fish. No reason to undersell that bit. But with Alaska, we got plenty and more of all of it.