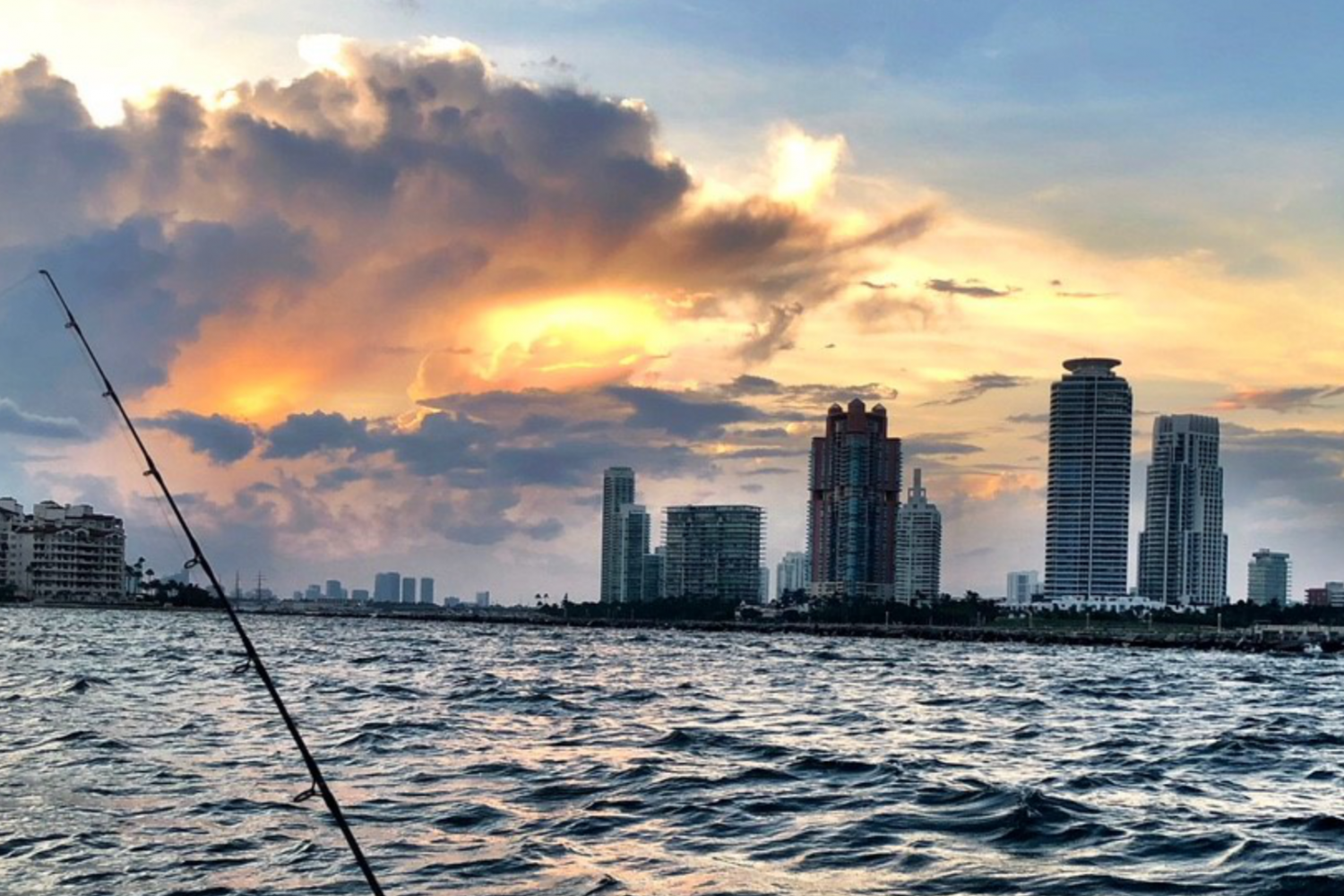 Party in the city where the heat is on, all night on the beach ’til the break of dawn…

So Will Smith was on to something there. I just got back from Miami and it was a hell of an experience. I flew in on a Tuesday for business and knew right away that the city was special. Miami is the fusion of urban advancements meets tropical weather meets island-esque vibes. Maybe there are better ways to describe it but the sun catches it’s skyscrapers and office buildings as if they’re jewels in the Wizard of Oz’s Emerald City or something, and even as you walk through downtown you’re totally away that spectacular blue-green waters and white sand are practically a stone’s throw away in Biscayne Bay.

So needless to say, you know that the water was calling to me. I met my client and hooked up with a guide to check out Biscayne Bay in his little flats boat. Even for just a quick trip, I figured we might find some tarpon, snook, or sharks.

And the timing for it was perfect. Take care of business during the day, and you can find some spectacular fishing on the bay during evening and night hours. At least, that’s what the guide kept assuring me.

From a non-fishing perspective, it was perfectly surreal. Sitting out on the waters as the sun sank down, you could feel the heat sort of evaporating, replaced instead with a cool breeze coming off the waters. The sky stretched from horizon to horizon like a dome overhead, and at the moment of twilight it was split into three bands. In the east the night sky had already come out in a midnight-blue band, dotted with a couple of the brightest stars. To the west, the sky bled into stunning oranges and pinks from the setting sun, and in the middle was a strip of aquamarine, almost a reflection of the waters on Biscayne Bay.

With sunset, the city itself came to life, buildings and street lights, car headlights, and the rhythmic vibrations of latin music and pop. We were surrounded by bridges and skyscrapers, planes taking off and landing at the airport, while closer to us swam dolphins and tropical fish. The waters shimmered in clear blues and greens, sparkling like diamonds as the last rays of sunlight splashed across the surface.

We had taken the flats boat out before dark, and headed over to the jetty where the Atlantic Ocean meets Biscayne Bay. There, we drifted around for an hour, just fishing without catching much. The guide kept telling us over and over that we’d have better luck once it got dark, but after an hour I was getting impatient.

But, as fishing is, you never know what will happen. Suddenly our lines were screaming off. I jumped up, and before I realized what was going on my pole was bent over, flexing so hard I thought it might actually snap in two. Our guide ran to the pole, and right before our eyes a 100 lb. tarpon practically flew out of the water, shaking its head.

Freeze-frame right there: this 100 lb. beauty of a fish seemed to move in slow motion through the air, barely more than a silhouette against the fading daylight, while all around Biscayne Bay are twinkling lights warming up for a festive night. From multi-million dollar condos, down to this little jetty and the Atlantic Ocean beyond, it was just us and this fish for a moment.  End freeze-frame.

A tarpon is basically just an overgrown, giant minnow, but 100 lbs of fury is an awe-inspiring sight. He hit the water and screamed back toward us, popping off the line. When that happens to a true angler, the blood starts to boil real quick. We’d been hoping it would be a good fishing day, but we were stunned at the speed of the hook and the speedier loss of that fish. But the guide said when you hook them you have a good chance of pulling them in, so we were just unfortunate.

And we were unfortunate the next three times as well, as three more tarpon all got hooked and popped the lines astonishingly fast. We did catch a black-tipped shark, about 50 lbs, a couple of snook, and by then it was pitch black.

It ultimately ended up being a night of “what-ifs” and imagining what could have been. Once it was pitch black, we decided to go sight fishing for tarpon, and I wanted to do a little fly fishing. We posted up under the bridges and snuck up on the tarpon, where we could see their silhouettes down in the water.

Getting one to eat on the fly is not the easiest thing, but I got two to strike. I just couldn’t hook them. I blew some more chances there on these 50 lb. tarpon, but it was very cool fishing under the bridge as cars shot past overhead.

Then our guide said, ‘Let’s go to the lights.’

We didn’t know what that meant, but the guide took us around the bay, cruising around in the pitch darkness in front of these multi-multi-million dollar mansions. They have lights for their big fancy boats, and the tarpon come and eat the fish that are drawn to these blue, green, and red lights. We couldn’t really get them to hit, but the sheer adrenaline rush of watching them dart in and out of the lights, watching them feed on the tiny fry — that was awesome.

We did manage to catch some jacks that were congregated in these docks, and by that time it was 2:30 in the morning. We’d started at 6:00 that evening! We didn’t catch many fish, but we had our chances, and more importantly the fire was lit inside me.

Next time I plan a business trip here, I’ll be fishing for more than just one night. Maybe I’ll even get a second home out there…someday. It’s probably safe to say that most people go to Miami for the parties than the fishing, but from the little taste I got on Biscayne Bay that night, I’d say the fishing is a party in and of itself.