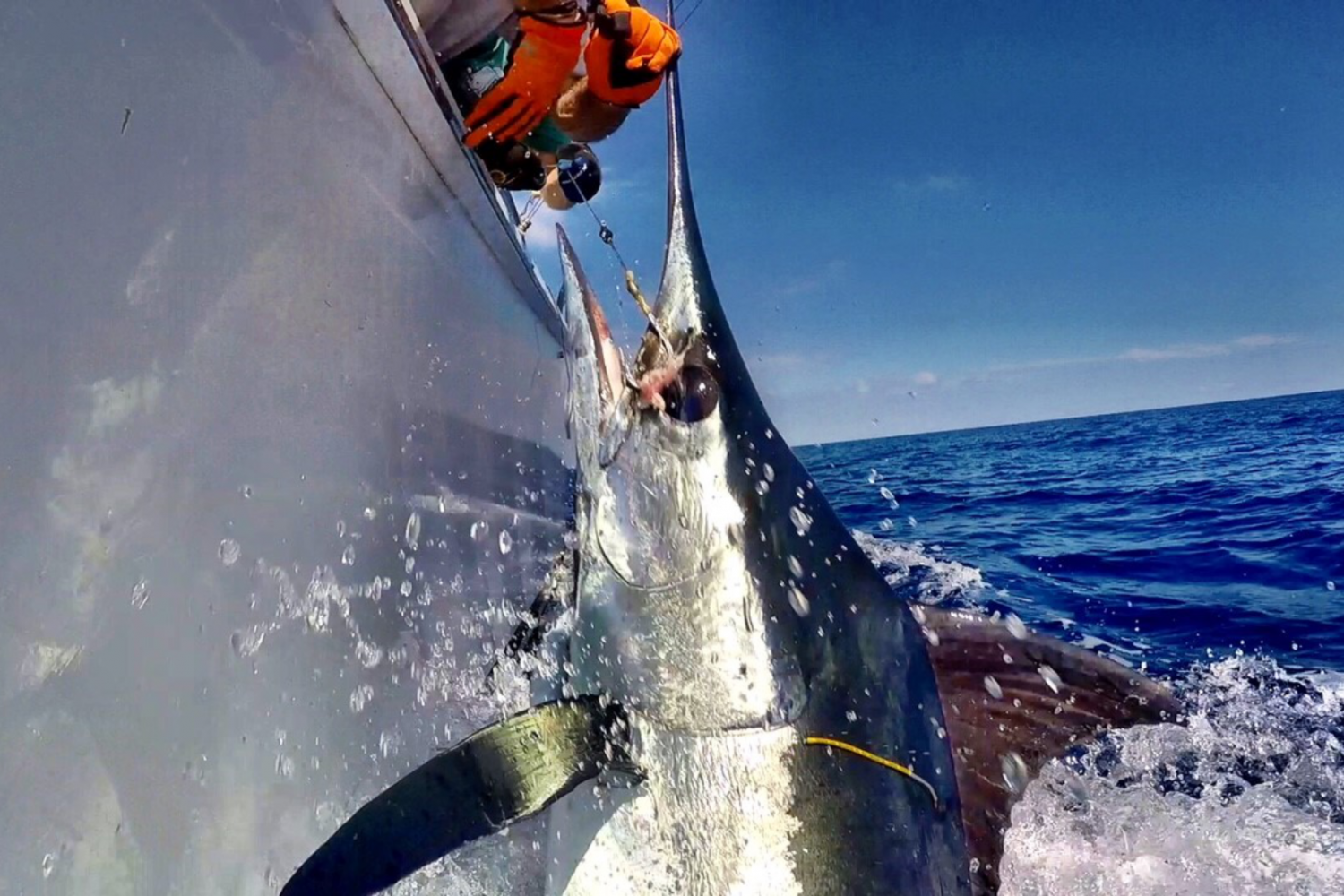 We tend to have big expectations for ‘firsts.’ I sure do, at least. Whether you’re just getting into the sport of fishing or you’re a long-time pro, something is driving you. Something gets you up at the buttcrack of dawn and down to the marina. It’s like a bold fin on the horizon, cutting sharply through the waves. We can see it in our minds. So we chase it.

…We just don’t expect to feel empty when we reach it. How does a 312-pound marlin leave me feeling quiet and reflective?

I was in Maui on a family vacation, enjoying a nice getaway with blistering sun and some beautiful surf. But sea legs can only stay grounded for so long; my dad and two brothers and I……we grew restless. We felt the water calling.

We chartered a little 6-pack boat and headed out to the deep ocean, looking for tuna, or wahoo, or marlin. Instead, we found a tournament. You would think that the dumb luck of stumbling into a competition and paying unexpected tournament fees would somehow give us some fortune out on the water, but we only had modest success– some yellowfin tuna, about 10 or so altogether, all weighing around 10-15 pounds.

The tuna went in a live-well, and we kept cruising, hoping to cross paths with some marlin, but luck was not on our side. So instead we pulled up to a buoy we’d heard a lot of tuna could be found, and we cast out hoping for some bigger ones than we’d already got.

You might ask (and you’d be right to) why we were so dead set on a marlin. How could we not be? There’s something special about that fish. Long, powerful bodies and mythical sword-like noses. You can’t be out on the deep water as much as we are and not think about going toe-to-toe with this creature. It’s like a medieval joust, my rod against his nose, and in my gut I knew who would win.

These are the kinds of thoughts I’m having when all of a sudden the captain screams, “Huge shark! Shark off the bow–that’s a tiger shark!”

We all run to the front to catch a glimpse, but before we can a deck hand yells back, “Holy shit. That’s no shark. It’s a huge marlin!”

What follows is admittedly a blur. A mad scramble to rig the bait and get it in the water; I scooped out an earlier tuna to bait with. It barely splashed in the water before that big sucker gobbled him up. I tried to set the hook but it pulled clean through, right out of his mouth.

It can all happen very fast. That dream I could see so clearly all day, that chase for a beautiful marlin and the long search across the deep waters for the better part of the day. He’d come upon us in an instant, and in the blink of an eye he’d taken our tuna and moved on.

But then he came back, not three minutes later.

I tried a different bait this time. He swallowed that too.

The fight was on.

And just like that, it was over, too. Five, maybe six minutes later, and the marlin was dead.

I witnessed firsthand an interesting fact off the coast of Maui that day. Marlins, like some other sharks, fish, and rays, sometimes barf under stress (hey, we’ve all been there, right? …right?). They literally spit out their entire stomachs, a phenomenon called “gastric eversion.”

This can be a really great “cleanse” of sorts, given how frequently they eat garbage, bones, and all sorts of waste that can’t be digested, but in situations like this one, it spelled instant doom when he choked on it.

It’s funny sometimes how we spend so much time imagining a moment, or chasing a vision, and then when we finally get to experience it, nothing is like we thought it would be. My first experience with a marlin, what I thought would be a long, heroic fight between me and this giant of the deep, it was an anticlimax.

The marlin was 312 pounds, and we got him into the boat and began to head back. We got some great pictures and even took second place in that tournament. Not bad for a day’s work, but nowhere near the adventure I had dreamed of. We gave the prize money to the captain in gratitude for the long day.

We all get into the sport for different reasons. Some want a quiet pastime, others have something to prove. Some do it for the memory of a father or grandpa who taught them the agonizing patience of fishing on a junior’s training pole. Everyone is searching for something different, out there on the water. For me, I thought a 300 pound marlin would fulfill some sort of quest I had within me, or at least be the highlight of the year, but no. Not this time at least.

I guess the search continues. Until next time.