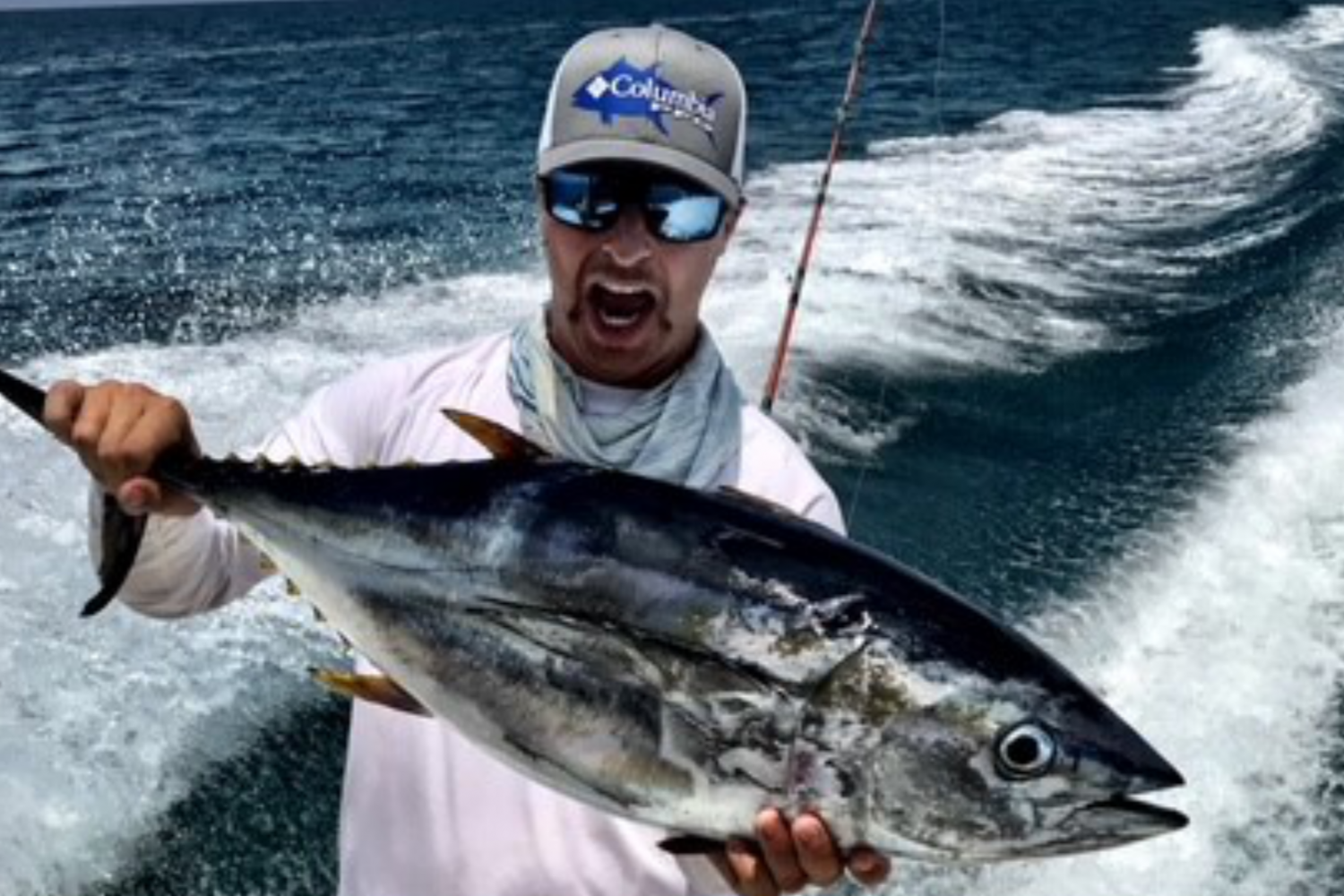 Every chance to get out and fish is special, of course. But every once in awhile, you get a ‘perfect storm’ of sorts with the right company, the right setting, and the right catch. That’s what Los Barriles was like for me in June.

I went down there for a few days with two of my bust buddies and one of their fathers, and we rented a condo his Pop had been going to for over 30 years. Little things like that remind me of the bigger picture, the beautiful connections we build in this sport as we do in life.

The first day we headed out on a great little ‘bite me’ six-pack boat. We got to cruising with the waves skipping by beneath us, wheeling out past the pier where all the other boats all line up in the morning from around the harbor. It’s a circus in the best way, but we steered clear of it to head about two hours south.

Typically, we don’t see a lot of fish too far outside the harbor, but on this morning the waters were teeming with life. All around us were flying fish, whales and dolphins, even some birds swooping into the mix. I had to stop and marvel for a minute at the beauty of God’s work all around us, like we were in one giant aquarium. But a bit of sea spray to the face brought me back to the moment quick enough.

We picked a spot and got our lines in the water with some feathers hoping for a great catch of tuna, and we weren’t disappointed. We stayed out there a good five hours laughing and drinking beers, telling jokes with the ocean all around us.

And we caught a haul too, a good thirteen tuna between the four of us. When we got back we took some home for packaging and took some back to the restaurant, where they cooked it up sashimi style for what was seriously one of the best meals I’d had in a long time. It was surreal sitting there, just the four of us, drinking into the night and eating the catch we’d hauled in ourselves. It was the perfect end to a perfect day.

You might imagine the perfect ending brought around a slightly rougher beginning. The next (very groggy) morning, my buddy Ryan  and I somehow got ourselves out of bed early to go fly fishing on a small panga boat we rented for the day. Compared to the day before, it felt a little more like an Ernest Hemingway story being out on the panga, but it was peaceful and quieter, which is exactly what we needed.

We hand-tied some flies and I ended up catching a nice dorado (Spanish for mahi-mahi) on the fly rod, along with another tuna, which ended up being the highlight compared to the disaster that followed.

I might still lose some sleep over this, but I hooked a great, long amberjack that morning, and boy I thought we were in for it. Just as soon as the adrenaline shot through me, about five seconds later he popped me off and just like that was gone. What happened was, the captain had tied on the bottom and he pulled the knot — so really I blame the captain, not myself!

Despite the loss of the amberjack, we brought the mahi mahi back and had it cooked up just like the previous night. They made an awesome, fresh ceviche and some truly dynamite tuna tacos. They were good, but the whole time I was eating them I was dreaming of the amberjack!

The group headed out Wednesday morning and I decided to stay behind. There was a hurricane coming in, and I was exhausted from the last two days.

And what a great decision it was. I took the day for some quiet solitude, fishing from the beach by myself. While I was relaxing, watching the tide pushing up the beach and sending little crabs and gulls scattering, the guys were having a nightmare. They made it two and a half hours south in high winds, riding twelve foot swells out in the tempest.

Not only was everyone borderline seasick, retching and holding on tight, but they had a struggle to avoid a bad collision — one minute they’d be atop a swell, seemingly alone, and the next they’d crash down, with a nearby boat almost right on top of them. Let’s just say I’m glad to have missed it.

And while they were being thrown around having what must have felt like a near-death experience, I nearly forgot the one I had myself on our second day. When Ryan and I were out fly fishing in the panga, we were about three, maybe four miles offshore. The deck was all bloody from the tuina I’d caught, and I went to wash my hands over the edge when I saw at the last second a yellow snake, reared back to strike.

I pulled my hand back real quick and we moved away from the water serpent, but I’ll not quickly forget the vivid yellow and the dark black of his back. I looked it up later and it turns out I was face to face with a yellow-bellied sea snake, one of the most poisonous in the world. To think I was only a foot away from disaster, and maybe death…I’ll never forget it.

I said at the beginning of this post that every moment is special, and this trip to Los Barriles is one of the best examples of that. From the incredible, almost magical abundance of life we witnessed in the open waters on Day 1, to a venomous serpent and mere inches from death on Day 2, and all the jokes, laughs, and drinks with amazing companions in between. I guess that’s life, a bit of relaxation, a bit of danger, and a lot of adventure. Needless to say, the only thing left is figuring out when to go back.