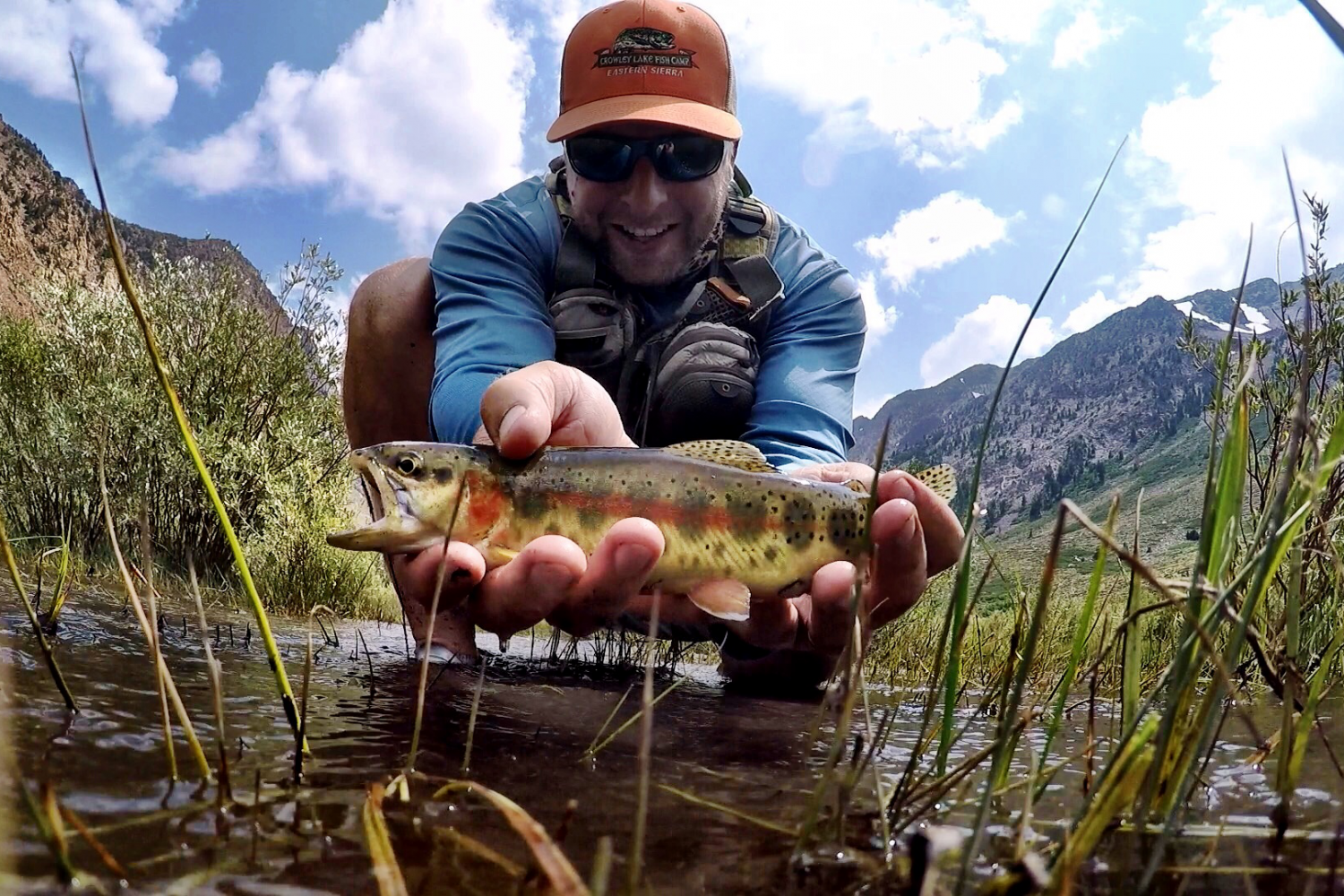 Of all the trout subspecies out there, by far the most elusive is (as its name might suggest): the Golden Trout.

This fish is uncommon to say the least. You won’t just stumble upon them, and even if you set out looking for them, there’s a decent chance you won’t find one. Technically the Golden Trout is the official state fish of California, but you have better luck coming across it in a dusty state document or museum. In fact, they were almost extinct at one point but have since bounced back a little.

Bottom line: they don’t get very large, but they are beautiful.

They are rare to come across.

And I wanted to catch one.

I guess we all have a fishing-bucket-list of sorts, and these goldens were on mine. Over the years, I kept an eye out for any leads on where I might have the best luck finding some. Then, out of the blue, I got lucky.

One of my good buddies works for the state, and he told me he’d heard reports of golden trout going through a system up near Laurel Lakes. Laurel is a body of lakes way up in the Sierra Nevadas, up at an elevation around 11,000 feet or so near Mammoth Mountain, with a whole creek system winding its way down towards Crowley Lake.

I already had a soft spot for the Sierras and the Crowley Lake region from the first time I’d ever visited, so my head practically snapped back when I heard the news. I don’t think even two full weeks passed before I’d planned a trip back up there, and my cousin decided to come along when he heard me talking about these almost-mythical trout.

It was a quest.

A quick note: if you live in or near California, chances are you’ve seen some stunning landscapes. We live in one of the most beautiful states in this great country, with some scenery that can rival the best in the world. I speak from the experience of my adventures and travels around the globe, and even I was blown away on my first trip to the Sierras. Which is all to say: my cousin was absolutely dumbstruck by the magnitude and beauty of this region.

We cruised slowly up the mountain roads in my Land Rover, neither of us talking for some time, except to make the occasional remark. “Looks amazing,” one of us might say. “Yep,” was the response. “Sure is.”

What else can you say? “These mountains and valleys are so majestic, I feel like I’m witnessing the moment of creation as God originally intended our world to be.” I guess someone could have said that — (it’s certainly how I felt) — but I think our muted silence spoke greater volumes. “Wow,” I said.

We’d turned off the main road and driven over these jagged rocky outcrops, meandered through the trees and across some little creeks, popping out of the dense foliage to creep carefully along sheer cliff faces, the edges just falling away to leave only powder blue skies. And then we arrived. Laurel Lakes, an actual slice of heaven. It was remote wilderness, removed from the heavily populated areas around it.

Laurel Lakes opens up in sweeping vistas with mountains dominating your whole sense of the world. These peaks stick up like rocky crags, poking into the clouds and gathering just enough snow-white powder to remind you how immense and magical they really are. The lakes themselves shimmer with blue-green notes, shifting colors as the sun passes through blue skies above. The land is rocky; the trees sparse and dotting the mountainsides. If you could step into a scenic mountain painting, it would be Laurel Lakes.

Here are two indicators of how all-consuming the beauty was.  First, I temporarily forgot all about the Golden Trout (yes, me, the fish-craziest of them all). Don’t get me wrong, we fished a little bit while we were there, but we spent more time taking in the scenery, sitting by the water and catching up. We were totally content just being there, being a part of this larger ecosystem. It was almost spiritual.

Second, my cousin had found out that he was going to be a father, which is probably the greatest news a man will ever hear. His wife called him while we were driving out, and as we sat there at Laurel Lakes I said to him, “It’s crazy that you’re going to be a dad soon.” He stared at me for a moment and then smiled the biggest grin. I would never call him out, but I think in the sheer majesty of our surroundings he hadn’t had the time to process the news.

The next day, we reluctantly packed up and headed out. We’d had no goldens, but our spirits were full and our hearts content. We were only a couple of miles from the main roads, however, creeping slowly along the cliffs and rocky trails, when I noticed some meandering streams. I felt a flicker of promise. Call it intuition; maybe we had a chance after all.

We left the car and hiked over to this creek, slow moving and crystal-clear waters, and before five minutes had passed I saw a flash of light. It could’ve been just a reflection, a ray of sunlight lancing through the leafy canopy to glimmer on the waters, but you learn to trust your gut when you do what I do, and I knew what I’d seen. I nudged my cousin with my elbow and pointed.

In the shallow water of a bend in the creek, there was a little Golden Trout. He was neon, a sort of orangish-pink depending on the way the light hit and the angle he was facing, but he was golden, clear as day.

From our narrow perch on the bank, I had to close-cast to avoid the overhanging brush and leafy limbs, and I must have tried 19 times without getting that perfect cast to get his attention and coax him out. But I’ll never quit, so I cast a 20th time. And he bit. And I caught my first golden.

As full of awe and wonder as we’d been up at Laurel Lakes, I felt equal happiness and pride to stand there with this rare and stunning fish. He wasn’t big, but he was remarkable. I stood there at the end of my quest, like I was holding a dream in my hand — like King Arthur finally holding the Holy Grail. All the stories, all the research, and finally the trek itself, all come to fruition in this moment.

Elated doesn’t begin to cover it, so I went ahead and caught a few more! When you get into a rhythm and the world is sending you only the most positive vibes, sometimes you feel like nothing can go wrong. This was one of those times. The Sierras were already one of my favorite places on earth, and this trip basically just added a golden cover to the incredible memories I have there. It felt like I’d discovered my own secret spot, and not just discovered by chance, but somehow earned. Like I had been deemed worthy.

Or maybe I just got lucky. That’s the truth of it sometimes. Maybe any crazy fool with a love of fish and a halfway determined attitude could go out there and catch a couple rare, elusive Golden Trout, too. If you feel that way, I challenge you right now to go do it. Go catch some. I wish you all the luck in the world…because you’re going to need it. Happy hunting (and send me pictures when you do).