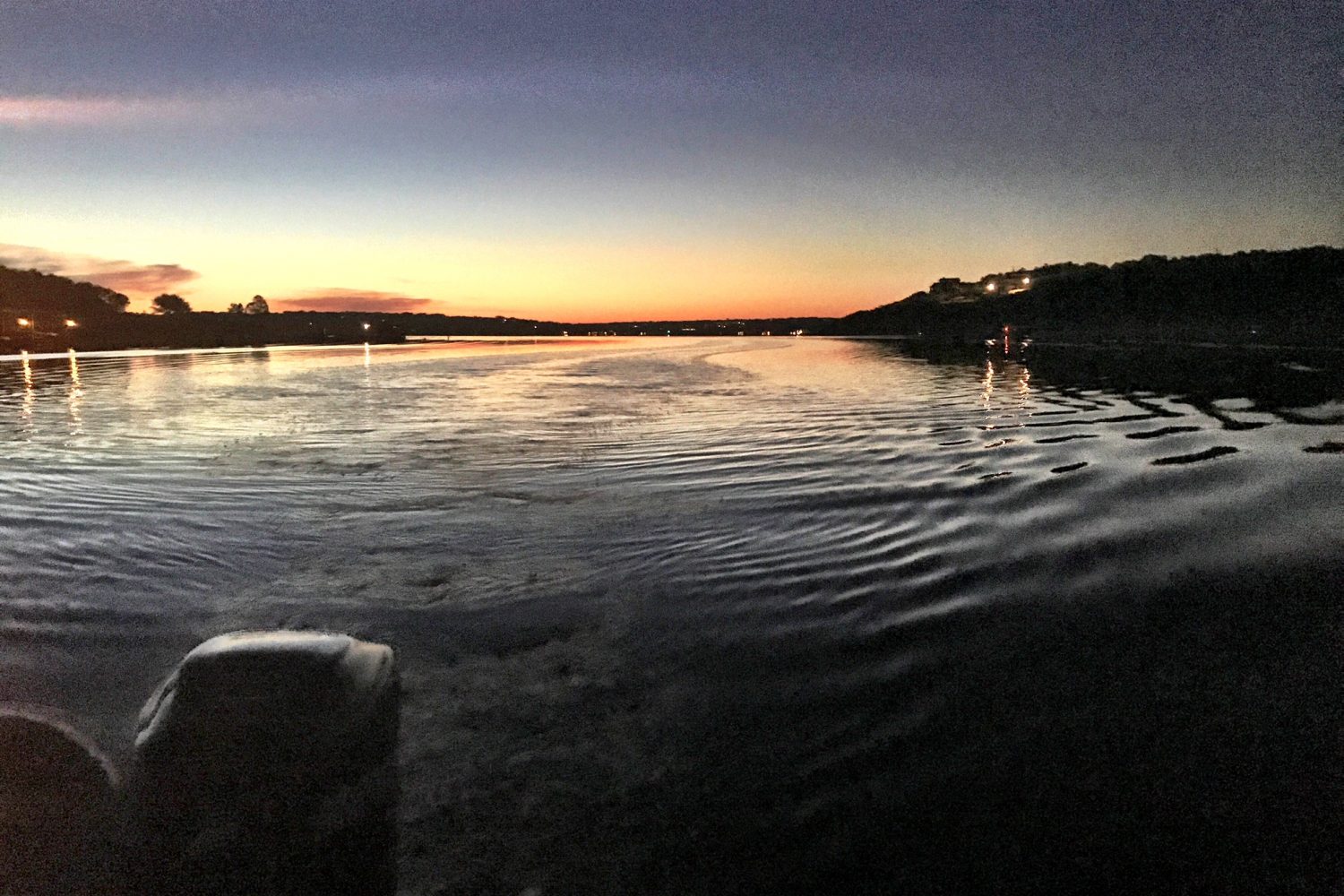 Let’s do a quick math problem. What do you get when you combine a bachelor party and a fishing fanatic on Lake Travis outside of Austin, Texas? Think about that, and then subtract sleep (if you hadn’t thought to do so already). If the answer you came up with was some kind of dream-like adventure, you’re spot on.

That dreamlike quality of this tale is partially just because I love fishing (and still get excited like a child when I have the chance to go), but also partially because I took a red eye out and barely slept more than an hour before this all began.

A bunch of us were headed out to Lake Travis to celebrate my brother’s bachelor party, and we’d rented a lake house for what promised to be a wild weekend. Knowing how much fun we’d be having, I chose to head out a day early to do some fishing before the “festivities” took over.

My red-eye landed at 2:30 am, that special time of day when night melts into morning and the world is brimming with magic. Anything feels possible, and I as tired as I was, I mostly felt excited at the prospect of a quiet day to fish. I picked up my brother in our rental car and we drove straight out to the lake.

We pulled up to Lake Travis around 3:30, and even though I’d hired a guide for the day, he wouldn’t be ready at the dock until 5:00. The night was pitch black; we’d left the lights of Austin shimmering behind us in the rearview and watched the stars emerge in the sky, more and more the further out we got, as if layers of hazy light pollution were being stripped away to reveal the twinkling diamonds above.

Even for a couple of adrenaline-fueled fisherman, we could only sit and appreciate the beauty for so long before fatigue settled in, and we caught about an hour of sleep in the car, dreaming of largemouth bass swimming through rippling folds of black velvet skies until our guide showed up.

When my eyes reopened, it felt like a waking dream, the kind where the air feels like it’s buzzing with electricity. The guide led us into the morning darkness on this great bass boat, and I really can’t describe what we saw.

Just imagine standing on a boat with water sliding beneath the bow like a sheet of glass, cruising around  50mph or so with nothing around you and hardly a sound, except for the distant splash across the waters. The darkness is like a mist over the water, and you can see some vague, blurry shapes just beyond your vision. When you try to zero in, they melt away like ghosts.

There are these tiny little lights everywhere you look — stars in the sky, stars reflecting in the water, and houses on the distant shore with burning lights. Maybe it was the red-eye, or maybe the early beers we cracked open when we got out on the water, but in those surreal moments before the sun came up, it felt like we were floating through this whole little galaxy, a fisherman’s universe surrounded by life and layered with mysterious wonder.

I know, I know, it sounds a little trippy and a little soft, but I hope someday you experience something even remotely similar, and you’ll get nailed with this tidal wave of understanding. It’s something pure and spiritual outside time and space, as if the world was showing me the same kind of peace and oneness I feel inside me every time I get out to fish a new adventure.

Because that’s what this is all about. Adventure, fellowship, and fishing. And we did plenty of that. By the time the first rays of sunlight flashed gold on the horizon, we got our lines in the water, and before long we were hauling them in. We caught about 30 fish or so, mostly largemouth bass and a few odd blue gill. They weren’t massive, but they gave us a sense of the life teeming in the depths of Lake Travis — and the guide said it was “an off day.”

By the time the sun was up and the darkness dissolved away, the black waters where we’d seen the stars were suddenly crystal clear, and in some parts we could see straight through to the bottom. We watched the fish swimming around and we fished top water most of the day, and in between casts we’d jump right into the water to cool off.

Lake Travis was the quintessential southern lake, giving us all the best of the American south. The water was clear and refreshing, there were large schools of fish, and it was the perfect blend of spiritual-meets-adventure to kickoff my brothers bachelor party weekend. What more could you ask for?

Well, on second thought, the fact you’re still reading on this journey with me tells me you’re like me, and there’s always more we can ask for. The bachelor party and fishing worlds collided when my brother passed out on the top dock one night, shoved a couple of fish right down his pants.

When he woke up four hours later, he stumbled around in a fog, and it was several minutes before he realized there was something in his pants-leg moving that shouldn’t have been! He freaked out as the fish started falling out of his pants, one after the other, while we all cracked up laughing. Once he got past the shock, he laughed with us while we gathered those fish up and used them for bait, catching some catfish and bass off the dock.

A bachelor party is all about adventure in the prospect of the next great union in a man’s life, and Lake Travis certainly delivered on all accounts.