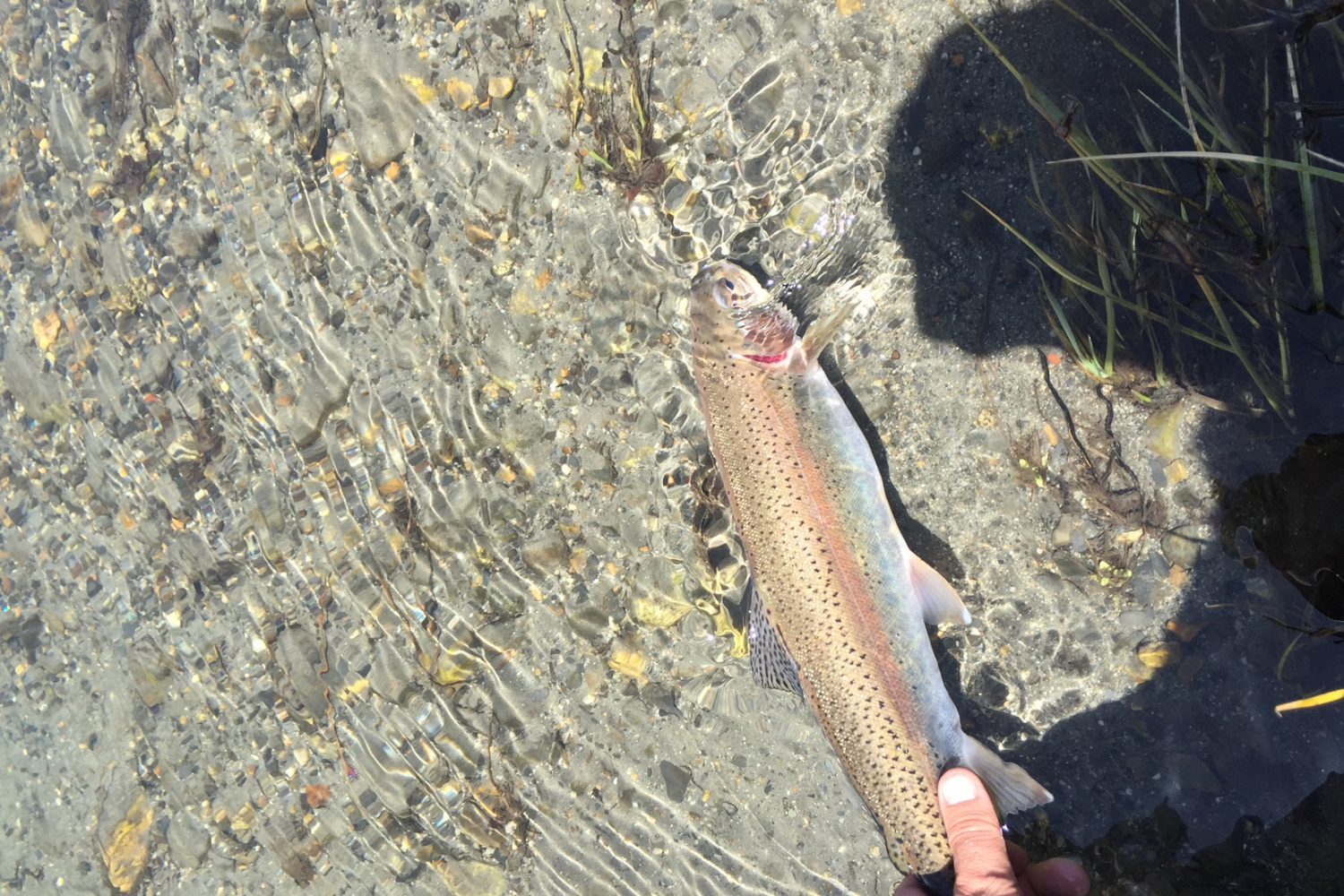 As kids, we have a fascination with things like arrowheads. When we see their rough-hewn edges, blunted tips worn dull over the years, we can vividly imagine them when they were whole. Kids can envision whole battles, chases through dense forest brush, horses galloping across grassy plains, and entire tribes living off the land. We see all that in an arrowhead.

So it’s not hard to imagine that a place like Lake Arrowhead calls to mind similar dreams. Out there in the depths of Angeles National Forest, surrounded by ancient-sounding names like Twin Peaks, Aztec Falls, and Heart Rock, the calm, clear waters take me back to a primitive time deep in my bones, and a simple question:

What do fish think about?

Lake Arrowhead isn’t the only place I’ve paused to wonder what goes on inside the head of these beautiful creatures, but it is a place that has surprised me time after time with the most memorable, surprising, and weird experiences.

I’ve had the fortune to visit Lake Arrowhead on a few different occasions. One of my good buddies had a lake house out there, so for years we’d all go out to party. We’d drink all night and stumble into an uneven sleep wherever we happened to be, and I’d wake up before the sun and go straight out to fishing. Hell, more often than not I’d not even go to sleep in the first place.

Up bright and early, a quick cup of coffee to cut through the raggedy layers of haze around my senses, I walked the banks of the lake fishing with light line. I don’t normally target smallmouth bass, but something about that morning out on that lake made me love them.

I used a four-pound fluorocarbon line with a number 4 hook and a nightcrawler for bait. The water there was so clear, I could see these smallmouths lurking under the docks. In my sleep-deprived state, it almost felt like a dream, watching them and feeling like they were watching me. They looked to be anywhere from three to five pounds, decently sized, and just waiting.

Sure enough, as soon as that nightcrawler hit the water — BAM! — they turned and struck like lightning before the worm even had a chance to sink. Those smallmouth fought hard despite their size, and I’d be dragging them through the waters even as the sun began to spill its light from the waters edge out across the lake.

In those moments, the full weight of the memory is never just the one moment — it’s the sum of the fish and the cast, the strike and the fuzzy morning sleep still rubbing out of my eyes like cobwebs lingering in a corner. It was about who I was, who I am, and the time I had out there for just me. I always went alone, you see, and I always had a ball. No one else had the energy or crazy passion dragging them up out of that sedated, bleary sleep. I can share the stories, but never the full weight of the memory.

It wasn’t always just smallmouth fishing by the docks there. My buddy also had a boat we’d take out by the dam for some trout fishing. There was nothing especially enchanting about the day itself, just a sunny afternoon on the boat, temperature mid-80s and an easy breeze just barely brushing the tips of the water with flecks of white foam.

While we sat there rocking, I cast out using power bait and pretty quickly hooked something. As I reeled him in, I noticed immediately through the waters that there was something distinctly different about this fish. A little two-pound trout is all he was, but he had this unusual mark on his head. I thought, maybe his mom dropped him when he was younger?

The line snapped, just as I was about to lift him in. He was close enough that I could see where he was hooked; I could even see the bait remnants just outside of his lip. It angered me just a little that he fought and snapped my line right at the end, but I wouldn’t have kept him anyways.

Now, I’m giving away the ending here, but there’s a debate among anglers that goes back as old as the sport itself. How long after a fish has been hooked does it take to eat again? Answers range from a day or two up to a week, and I was always in the roughly-a-day camp — especially to eat the same type of food again. But I re-tied my line and cast out, and 30 seconds later felt a tug.

I set the hook and began reeling. Right away, I noticed the fish on the other end didn’t have the gusto or fight a freshly hooked fish normally does. Through the waters I caught a glimpse — a strange mark on his head!

To this day, I’ll never forget the disbelief, the laughter that ripped out of me when I saw him again. Sometimes maybe fish don’t think, or maybe they think they can get away with it the next time around. Maybe that runt had something to prove. I still laugh about it today; I just know that after I threw him back someone probably managed to hook him about 20 seconds later!

A distinct marking on a trout like that isn’t the most unusual thing I’ve ever seen, but the depths of Lake Arrowhead did show me one of the weirdest, most unnerving…things…I’ve seen in my life.

I think it was a catfish.

It was something that looked a little more like a mutated ninja turtle (yes, mutated. As in the mutant ninja turtle then mutated even more). It looked like some kind of monster, misshapen and bulbous and all sorts of messed up, the water sliding off him in dark sheets that looked more like slime. I’m not sure. The memory sends little goosebumps up my arms, even now.

I’m not one to shy away from the gross or the abnormal, and I never have a problem handling any type of fish. But I’m not so sure that was even a fish, and if there was, I’m not sure what was wrong with it. Maybe it was a relic, like the lake’s namesake, and it’s just persisted for untold millenia at the bottom of the lake. I don’t care to find out; I cut the line and never looked back.

Life is weird sometimes, and as unsettling as it was, I appreciate the breadth of experience I’ve gotten from a great place like Lake Arrowhead. It’s got beautiful waters, easy access, and an easy southern california drive cruising through Angeles National Forest. The hiking trails give you a primitive feeling of ancient exploration and wilderness, while the creeks are perfect for a swim or a photo op on your hike. You can feel far removed from the city without trekking halfway around the world to experience something grand.

Truth be told, I haven’t been back since I had kids, but I’m trying to get back there soon. You never know what experiences — real or imagined — await you with an arrowhead.