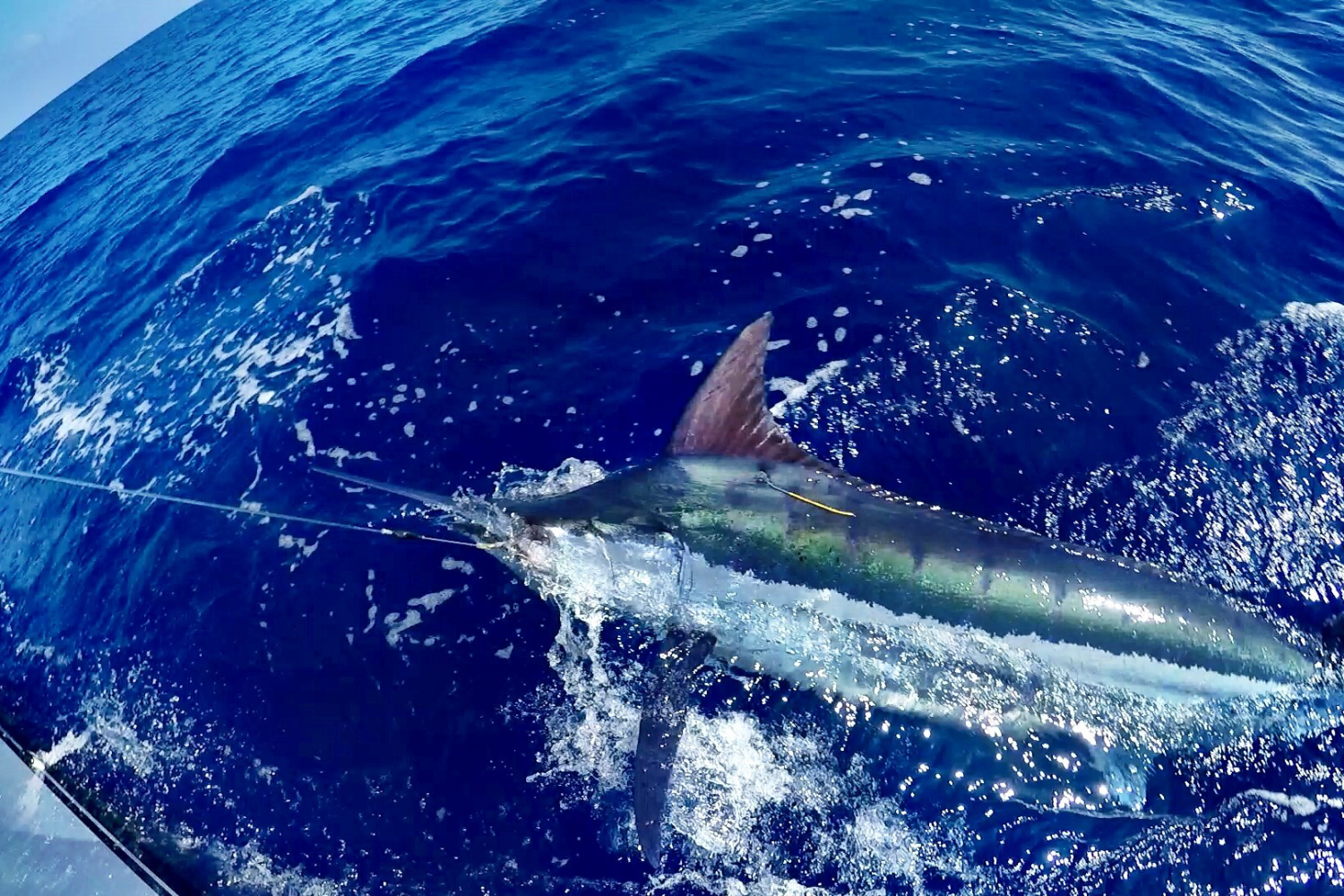 What makes a good fishing day? Sometimes people ask me if you can catch nothing and still have a great day, or if there’s a certain number of catches that makes the tipping point. The shortest answer is “It depends,” because every outing is an adventure and new memories regardless of the day’s haul, but it’s a no brainer that a wild fish frenzy makes for epic stories.

In Kona, though, we had an epic day with just a single, stunning fish. Oh yes.

Kona is a beautiful area off the main island, also called the Big Island. You may know Kona for a special blend of coffee they produce or as the home of the world-famous Iron Man Triathlon championships, but I know it from a handful of trips with my wife and in-laws.

A good family vacation involves relaxation and recreation with swimming, paddle boarding, and a hike to the Mauna Loa volcano. Mauna Loa is one of the largest active volcanoes in Hawaii, oozing fiery molten lava for hundreds of thousands of years, actually contributing to the formation of the Hawaiian islands in the first place. Its gentle slopes rise up next to the tropical waters, sparsely dotted with green vegetation and long, furrowed channels like cuts down its sides. This fertile area contributes to the famous (aforementioned) Kona coffee.

Volcanoes and tropics are all well and good, for awhile, but eventually my heart leads me back to the waters. Or in this case, my brother-in-law wanted to take me out fishing. I was more than happy to oblige.

We left the island that morning just after sun-up, and there were still some rosy pink hues brushed on the horizon as we gather at the dock. It was set to be a 4-hour trip, about 3 miles off the coast or so. My mind was already out there in the deeps thinking about tuna, sword-fighting with marlin, and generally swimming about. Before I knew it, we were boarded up and heading out, and my legs rolled with the bumping rhythm of the waves.

Although tuna and marlin were on my mind, we were really out there for whatever we could catch. There’s an old joke that if you ask me what I’m out fishing for, I’ll tell you once I’ve caught it, and I think that accurately sets our mood. We were just laughing and enjoying the waters, rocking with the swells and swapping stories. The ocean stretched back towards the island, sapphire blue, and the island sat above it like a lump of emerald.

Three miles out, we dropped in our rigs. And so it began.

And finally, an hour in, a huge marlin surged up out of the water, just next to us! For a split second it seemed like he might take off and fly through the air, but he splashed back into the water and was gone. After a quiet start to the day, it almost felt like a taunt. He was saying, “Come and get me, if you can.”

So we tried. We dropped our lines in hoping to hook him, but not really expecting to.

Then suddenly, I did. I felt the hit on my line and set the hook quickly, and as soon as the fight began I knew in my gut it was the same marlin. For ten minutes, twenty minutes he surged through the waters, and I kept calm while letting him run the show. He was fast, and powerful, but I was patient. I reeled him in slowly, very slowly.

And just like that, he was done. Forty minutes of hard fight and it was done in a flash. He was 250 lb. of sleek, stunning power, and for a moment I was speechless in awe of his raw beauty. Then the high-fives began.

Landing that marlin marked the halfway point of our trip, and honestly it was the cinematic climax of the day. We puttered around for a few more hours without catching much else, but we were still riding on the adrenaline wave and the blessing of that beautiful marlin. The captain shared some stories of his best days and the fishing legends he’d seen down here off the coast of Kona, and we felt like we’d become part of a larger tradition with our catch.

It’s a real testament to how good the fishing is off of Hawaii when a single, stunning catch results in total contentment for the group. Four hours and $750 later, we’d laughed and talked and had a couple of drinks, and happened to haul in a 250 lb. marlin along the way. I remember sitting atop the boat with my father-in-law, just having conversations about all things great — God, family, fishing, and business (in that order).

He shared some stories of his high school years, when he sailed to hawaii for the summer in a private boat, and lived off the sun, water, and surfing in the most spectacular spots. While he talked, I looked out across the ocean, deep blue waters stretching unfathomable leagues away, and thought back on my own high school days.

It felt as if all the previous versions of me were still out there, still fishing in those moments I could recall so clearly, somewhere across the water. And in the other direction, there were future versions of me, fishing future adventures, and in some of them I would be laughing into my beer and telling a story of this very day.

Which I guess is what I’m doing right now. In Hawaiian culture, ancient legends are passed down from generation to generation, guiding the ways they connect to the land and care for the ecosystems. It is a venerable art in storytelling, and to answer the question I asked in the beginning of this post — that’s what makes a good fishing day, no matter how it plays out.