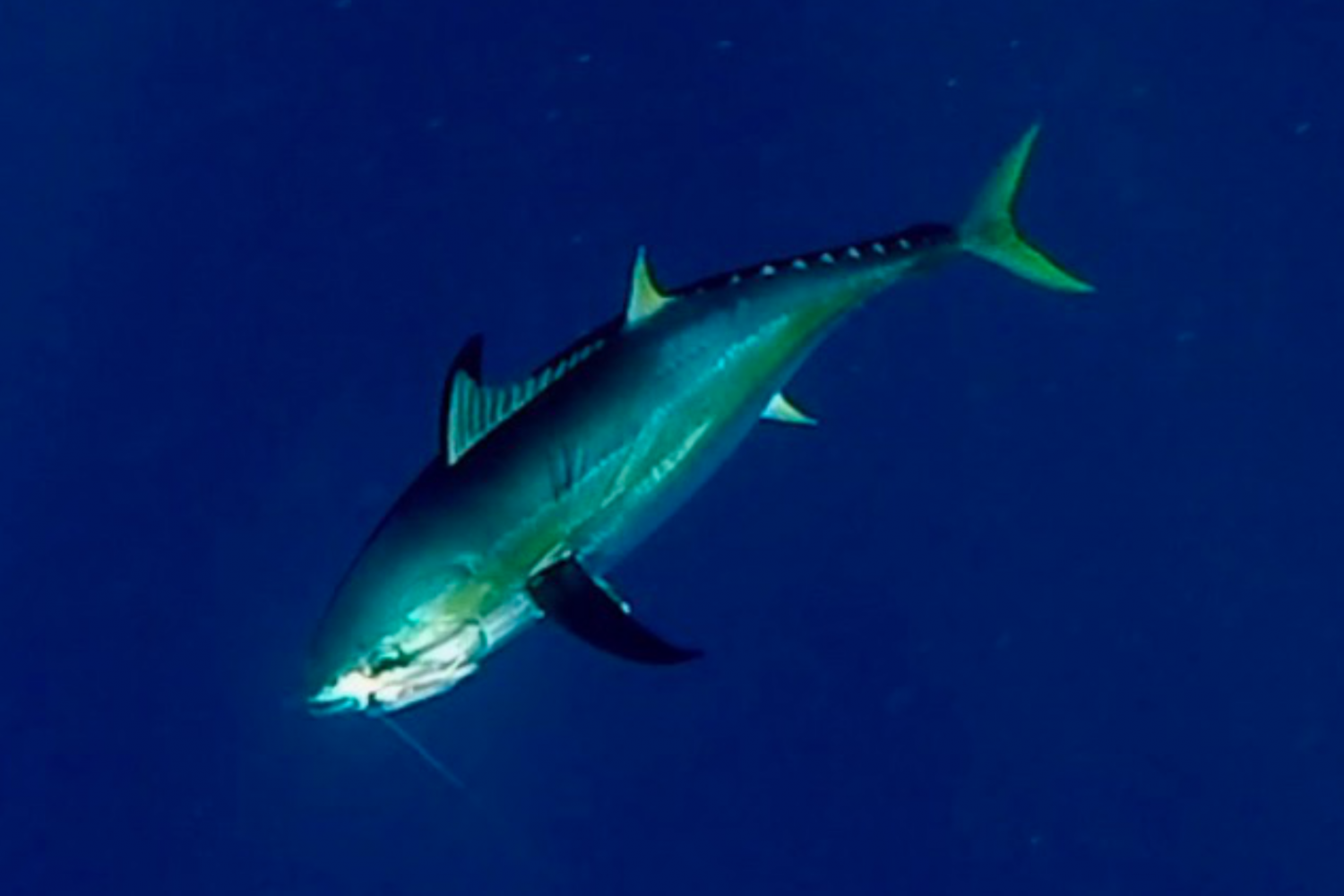 Man. This island is an interesting place. You’re about to get hit right in the face with some fishing, a brush with a dangerous monster of the deep, and a tragic tale of love and revenge.

I had been out on a 2.5 day charter with my dad and brother out of San Diego. We had a grand plan to head out to the tuna grounds, catch a bunch of tuna, and head back in. Pretty straightforward type of adventure.

We got out there and landed the first morning, and the fishing was unreal. Epic proportions I can’t even begin to describe in detail. Every person on the boat was catching tuna left and right almost faster than we could cast out, if that was even possible.

But is there such a thing as too epic? Somehow, we all hit our limits of bluefin and yellowtail within the first four hours of being there. It was a freaking blur and a frenzy, to the point that I watched some dudes flick cigarette butts into the water to watch these massive 30-40 lb. tuna surge through the water and gobble them up. It was nuts!

And it was hard to walk away. But there are limits for a reason, and even though we wanted to push the boundaries, we’d already hauled in a miraculous catch. Think: 25 people fishing, hit the limit of 5 fish for 2 different kinds of fish each — that’s 250 individual fish, and we still had a day and a half left to kill.

So the captain made the call. We weren’t done yet, he told us. “We’re heading to Guadalupe Island.”

You see, there were yellowfin tuna down there, and obviously we hadn’t caught any of those yet. So we thought, why not try to limit out on those, too, and complete the trifecta?

On the way, the captain told us about Guadalupe Island. It’s a breeding ground for giant yellowfin, which brought lots of great white sharks around there, too. I fell asleep picturing the dark slab of rock sticking up out of the ocean, waters so blue as to almost be black, and the tops of the rock disappearing into low line of misty clouds obscuring the stars in the night sky. And in the depths of the dark waters, somewhere below, I saw the white eyes of great whites gliding, brushing past only to disappear, melting into the darkness.

When we pulled up the next morning, it couldn’t have been more different. The sun was shining, the rocky mass of Guadalupe Island was practically shimmering with greens and blues against the tropical sun, and the water was clear and bright. The fish were lively, too! I remember seeing fish just flying in and out of the water, jumping and splashing like a child’s pool party.

We stayed on the front side of the island and caught some small yellowfin. We did well, but after the epic haul of the day before, and in absence of the 100 lb. monsters we were after, it felt like a little bit of a letdown. Us fishermen are greedy! We want more! So the captain took us around to the back side of the island to try our luck there.

We pulled into this little cove with unreal, crystal clear water. It would’ve been Caribbean blue if it was shallower, but instead it rippled with a deeper texture. Within 20 minutes, a guy hooked up a large, LARGE tuna.

For the next 30-45 minutes, he fought like hell. It must have been well over 80 lbs. at least. People started gathering around, hoping to get a glimpse of it down in the water. You could see 40-50′ down, but we were fishing in 300′ or deeper. And me, I was like a little kid, jockeying at the rails and peering over the edge trying to see what this devil looked like.

I started to see what we call “color,” which means the early shadows and shapes of the fishing coming closer to the surface.It was zipping in circles, starting a death roll, and basically signaling the fight was nearing an end. Most of the action had taken place in deeper waters, invisible to us, and it was all but done.

At this point, as a fisherman, your confidence soars; not much can go wrong to lose the fish. They’ve expended energy and are pretty much done. You’ve won the fight.

Foot by painful foot, we watched it coming up slowly. Closer and closer to the surface, until it was about 60′ down. We could just start to see it and make out some details.

And then out of nowhere we saw another shadow.

A much bigger shadow.

A massive shadow hurtling impossibly fast towards the tuna’s shadow.

A great white swept in and pretty much inhaled the tuna in one bite, his line snapped clean, almost like it had never been attached to anything at all.

And then he was gone. Swam away like no big deal, never to be seen by us again.

That was my first real, serious memory of Guadalupe Island, and I’ll never forget it. No one caught much of anything the rest of the trip, but as we were leaving I noticed a building on the island. Now, this island sits out in the middle of the ocean, and this building was maybe the size of a few porter-potties strapped together. Apart from a little bait shop, I couldn’t fathom any purpose for a structure out there.

I asked a deckhand about it. He told me the story.

Apparently, many years back, the Mexican president’s wife had cheated on him with some guy. Rumor has it that the president captured this guy and sent him off to Guadalupe with only this makeshift shack for him to spend the rest of his life! According to the legend, they would only feed him every couple of days, and if he tried to escape he’d be eaten by sharks.

It was a sobering tale, and as we watched the island recede behind us, my stomach rattled and lurched. I felt the surge of the boat plowing through the waves, rising and falling, only to rise again. What a terrible fate, a horrible punishment, stranded out on the island in a tiny shack, if you could even call it that, half-starved and alone. And not even a rod to fish with!

My thoughts went back across the ocean to my own beautiful family, my home and the life I loved, and I felt a pang of gratitude, an impulse to just call them up and tell them I loved them, if only I’d had cell service to do so. Even amidst all the adventuring, I think it’s easy to sometimes forget the real adventure we live out every day in our lives — the best adventures and the best memories with the ones we love.

By the time we got back, we had a ton of fish stories, and I added a new item to my bucket list: dive with great white sharks. The adrenaline surge from watching that oblong shadow rip through the water has stayed with me, and I can’t wait to get down in the water and see those magnificent sharks up close.

The trip also reminded me to cherish the ones I love, hold and kiss my beautiful family a little tighter, and never under any circumstances be in any kind of situation where I might be accused of even talking to the wife of the Mexican president. Simple rules to live by, right?