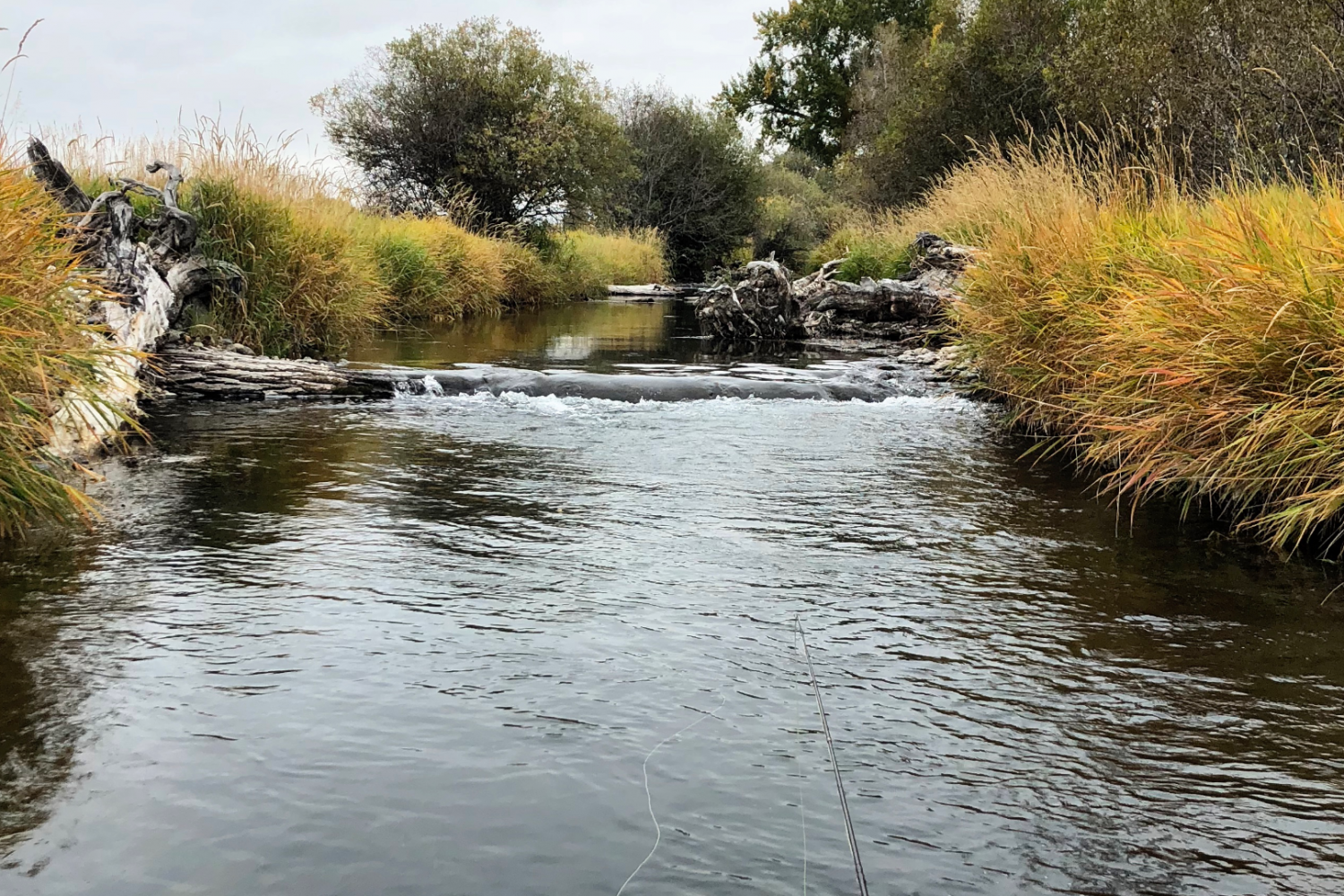 What if I told you it’s the home to a magical river system called DePuy Creek? You don’t have to take my word for it; you can check out 50 Places to Fly-Fish Before You Die and take Chris Santanella’s word for it instead. Regardless of who you’d rather listen to, it won’t change the fact that I had the supreme privilege to fish out here a couple of years ago, nor will it change that my experience was nothing short of miraculous.

You may remember that my in-laws are out in Montana, and they showed me the local ropes up there around Gallatin River. It was stunningly beautiful and provided some priceless bonding time for me with my father-in-law, Chuck. So when he asked if I wanted to check out DePuy, I was sold. When he mentioned we’d be joined by Brandt Oswald, who is a top-notch guide known in the area — a real phenomenal reputation as one of the best around — I was over the moon!

We drove out of Bozeman from my father-in-law’s place and, to be honest, I really didn’t know what to expect. At that point in time, I didn’t even know DePuy was a legendary fishery that made it a bucket-list type of destination for anglers everywhere. I just knew what I could see down the bumpy road ahead, and I was giddy with excitement.

You know what? I’m glad I didn’t know. I had no expectations going into it.

And we experienced a miracle.

First of all, the area we drove to was stunningly beautiful. It’s a private, family-owned system that you have to pay to gain access to, but not in the same way I was used to paying at certain private lakes around Orange County (if I was willing to pay at all, that is). This was different.

Here’s how it works in Montana. You drive down a dirt road, and you pull up to a little shack with a tin can outside, and it has your reservation number. You put your cash in the tin, and on you go. That’s it. There’s no one there — it’s 100% on the honor. And I really appreciated this system and what it represents, what it says for serious anglers. I felt immediately closer to a community of sorts, and began to feel a deeper connection that bordered on…reverence? Keep reading, you’ll see what I mean.

We kept driving down another dirt road past the little shack, and came to an area with trails and pathways leading from the road off down to the creek. We got our rods and hiked a short ways through fairly open forest until we came upon DePuy Creek.

It opened up before us like something cinematic. We emerged from the shadows of the forest and there it was, slow-flowing and wide, with small grassy islands dotting the center of the channel as it meandered downstream. “Crystal clear” doesn’t capture the way the sun just dances across the surface, like a stream of liquid diamond. The brilliance is mesmerizing, the ageless blue skies reflecting back and making the world seem twice as big and majestic as it really us. It was truly humbling, like time had rolled back to the world as it was meant to be, and we were seeing it for the first time.

So, naturally, after taking it all in for a long moment, we got down to business.. We started fishing for browns, and caught a lot in the 14-16″ range. The water was so clear, we could easily see them running through, and we were just having a ball catching fish after fish.

In a blink, 4 hours or so passed by, just like that.

Brandt suggested we go down the stream to a few spots he knew well. The fishing was just fine where we were, but it’s also nice to explore and see multiple sides of a place. And since we were practically in Eden, I was soaking it up.

DePuy is a spring-fed creek, and where the spring feeds into the water is supposed to be a nice spot. We were fishing a slew of still water, maybe 50 yards or so long. It wasn’t moving at all, and the trout were hanging by the little geyser. I sat on the bank watching Chuck fish for them. From 5 or 6 feet up, my view was supreme. I could guide him, offer tips where to cast, and Brandt was down in the water, supporting him with the net.

He caught a few, and our great day continued. At one point they were wading in the water and a trout — 18 or 19″ — came flying out of the brush and darted downstream. We laughed about how there were so many fish we might end up stepping on some.

But I could watch his activity from my perch, and that trout went downstream about 20 yards. He came to a place in the reeds that he couldn’t really go through it, over it, or under it. It was so built up, like a little dam. The only way out was back down towards where Brandt and Chuck were still standing. This fish quickly turned around and jetted back through this little channel.

I yelled to them, “Here comes that fish!”

Brandt responded like a pro (which, I guess he basically is). He looked down, and as soon as the fish got within 5 feet he shoved his net in the water. The fish couldn’t react fast enough. He got it! An 18″ brown trout in a net. We just cracked up laughing. How perfect, how clear, and how surreal — that combination doesn’t happen every day.

I proceeded to let them fish that spot and told them I was going to go closer to the source where the spring comes in. About 50 yards further down, I found a place I can only describe as heaven. This must be why people have DePuy on their bucket list. I couldn’t believe it was on this earth.

Imagine a waterfall of sorts, slow falling and gentle, gradually down and just flowing peacefully. But flowing from the ground, more like a mini-volcano of water. As the water flows down this 45 degree slope, it becomes a creek. It drops into a pool that is 20 feet deep and looks good enough to drink from, pristine and pure. I prayed, I fished, and I caught one brown.

But at that point I was just sitting in awe, thanking God for what he has created and for the opportunity for me to appreciate it. At some point, I made my way back to Chuck and Brandt, and we ended up calling it a day. The feeling of peace and awe stayed with me, though. It was perhaps the most idyllic place I’ve ever seen.

Who knows how long I sat there by myself in the peaceful silence, just the gurgling water making a melody as it trickled and splashed into life.. It was a true gem. And I was reminded, once again in small, humbling ways, why I fish. It’s about so much more.