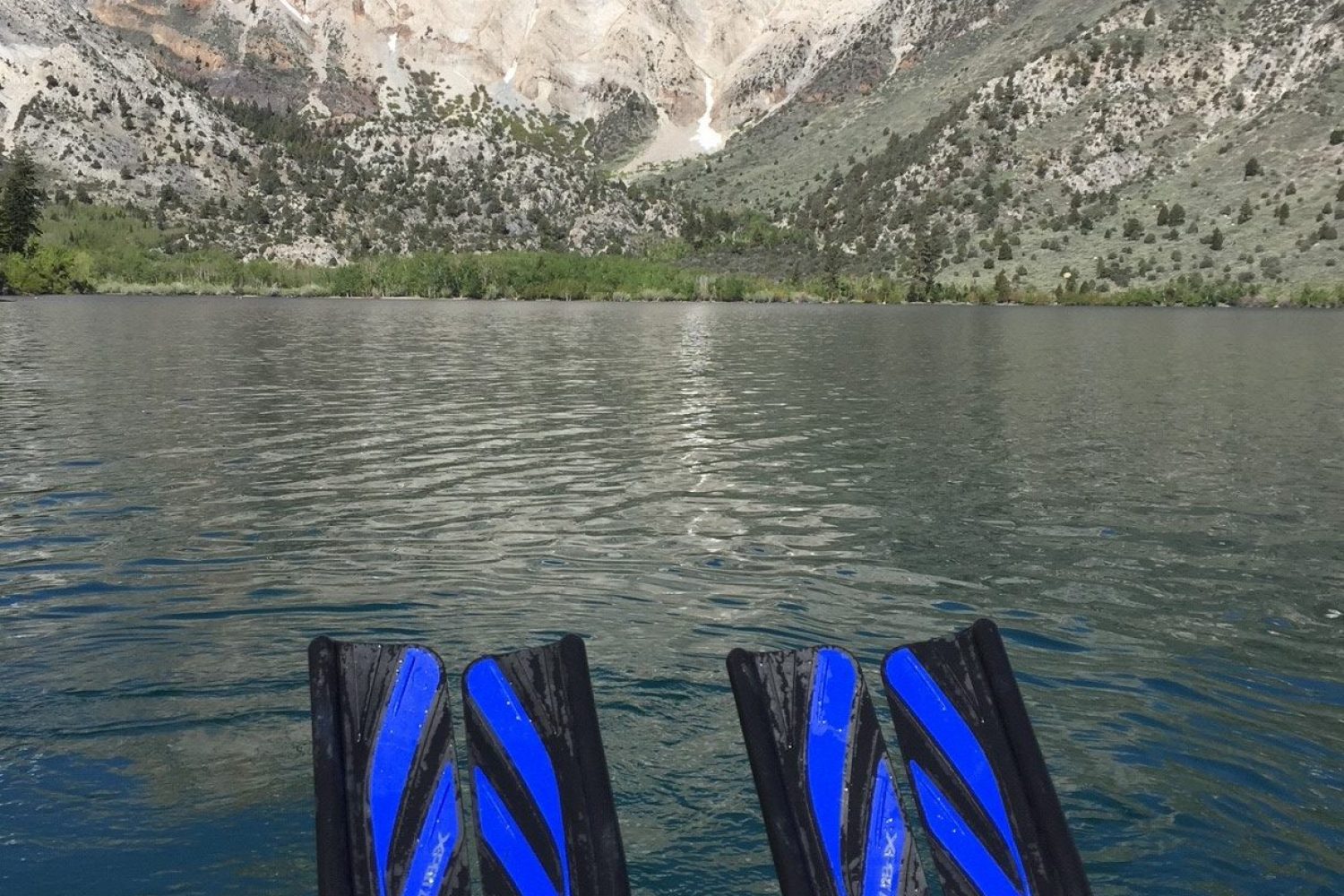 On my first trip into the Eastern Sierras, I just didn’t want to leave. I wanted more. So my buddy Ryan and I, instead of leaving directly, got up on our last morning and headed on over to nearby Convict Lake — a stunning locale with a darker, shadowed past.

Now, a quick aside. I’ve always loved the Eastern Sierras. I can’t write enough about how stunning they are — from the majestic Laurel Lakes where I pursued the elusive golden trout, to the McGee Creek and Owens River systems, where I’d learned some local secrets from the Sierra Drifters guides. But Convict Lake has some sort of mysterious draw to it, even to this day.

The lake sits in the shadows of some incredible, dramatic mountain-scapes, where peaks like Mount Morrison seemingly thrust straight up from the glassy waters’ edge. It’s a crater lake, which gives it a secluded feel, one that you could get away and hide out if you needed to.

And even though it’s a wonderful family spot that’s still great for fishing to this day, it’s that hide-away vibe that earned Convict Lake its morbid name

I’m no historian, but you can’t hear a name like Convict Lake without feeling the twitch of curiosity. And you can’t head up there or even bring it up in conversation without someone trying to offer their half-remembered spin on the history. So I guess it’s my turn.

Before it was Convict Lake, the place went by another name. Mount Diablo Lake. Which isn’t really much nicer. But in September of 1871, nearly 30 criminals at the Nevada State Penitentiary in Carson City overpowered their guards, stole guns and ammunition, and fled to the desert after a showdown with the remaining guards.

The group split up, and a small band of convicts made it 200 miles south into the Eastern Sierras, where one man in the group identified Mount Diablo Lake as a perfect secluded spot to avoid the lawmen and posses pursuing them. On their way, however, they shot and killed a local boy named Billy Poor, a Pony Express rider. The cold-blooded murder fired up the townsfolk in Mono County, and a posse tracked the criminals up to the lake.

After a roaring firefight and several more posses in the days and weeks that followed, all but one criminal had been killed or recaptured. Since then, the lake has been known as Convict Lake.

In truth, I didn’t know all the little details about Convict Lake when I went there. I did a little research after, and found no shortage of background materials, like this one from the Sierra Sun that fueled my little story above. Fortunately, I’m happy to report that history has stayed in the past, and the modern reality of Convict Lake is much happier, brighter, and friendlier.

Seriously, this is a family destination.

It also has one of the best restaurants in the entire valley. We go up there around Thanksgiving, we go for high-end meals, we go whenever. It has everything you’d ever want, and it’s the perfect place to bring the ones you love.

Back to My First Experience

As I said, I actually made it to Convict Lake on the back-end of my first trip to Crowley with my buddy Ryan. We were practically already there, so we figured why not check out Convict before departing?

We had no idea what to expect. I had in my mind that I’d catch some fish on a floating Berkley power-worm, a little split-shot with light fluorocarbon line. You know, like some kind of big shot? It was just a hunch I’d been thinking about as we approached.

Walking around the lake, you could see the rainbow trout coming right up to the top. But there was also a good amount of people fishing. You could tell from their body language though that they weren’t catching much. The fish were jumping, almost in mockery, and you could see people getting frustrated.

So out we walked to try our luck. I had my prepared set up I’d been working on, and I had no clue whether it would work or not. I figured, it couldn’t do any worse than whatever these other folks had tried. I cast out and held my breath.

And didn’t have to wait long.

I hooked up with a nice trout almost immediately! My eyes stayed on the fish, but I didn’t need to look around to feel the looks of annoyance, jealousy, and awe from the others. Or maybe the awe was all in my head. Either way, I proceeded to catch not just one or two more, but fifteen!

After that, I think I can say with more confidence that I was the most hated man there.

Passing it On, That’s What It’s All About

After the incredible haul, a little kid finally walked up and asked me what I was using. Here’s what kills me — I caught fifteen beautiful rainbow trout out there where no one else was having any luck at all, and not one grown adult asked me how I was doing it. But a child did. That fearless curiosity, passing on the knowledge — that’s what this is all about.

We stood there on this gorgeous, serene crater of a lake, flat calm, mirroring the blue sky above, and I got to have this nice teaching moment. I stopped fishing, took him aside, and showed him the rig. I helped him tie up his own. Ryan and I were about to leave anyways, so I gave him a couple extra set-ups. “Use this, and you’ll catch ’em.” But I let him do his own thing, too, casting to get a feel for it. Within three minutes, he caught one.

The smile on his face was its own reward; I’ll never forget it. In many ways, that’s one of my greatest loves is passing along my passion and knowledge to kids, and sparking a new passion in someone else. Especially for a kid’s earliest fishing experiences, I think it’s so critical to help ensure they do catch something so they aren’t just standing around, casting again and again and getting frustrated. It sets the tone for their whole experience.

I hung around and watched him catch another from the parking lot. I don’t know where he is now, but I can guarantee he’s eight years older and probably still fishing to this day.

And as for me, Convict is my home-spot for the family whenever we’re up in that part of the Sierras. We’ll stop and walk around, cross the suspension bridge and look out at all the fish. It’s an amazing place now full of my own memories with my wife and kids, too. We just walk around lazily, sight-casting for fish — I’ve gotten even better at targeting them from 30 feet up, looking down into the clear water and identifying the larger fish I want to go after. And my daughters have learned too.

We’ve gotten to know the lake pretty well. It’s familiar, comforting. I’ve gotten to see changes over the years, to witness the growth. There’s this beautiful eagle that tends to be there every summer, nesting. Then suddenly one year, we were there to watch the baby chicks try to fly. I thought of that boy from so many years back; I thought of my little girls growing up; and if I’m honest, looking down in the clear waters, I caught a little bit of my own reflection, too. But I haven’t aged a day — I have too many fish to catch to get caught up thinking about myself.