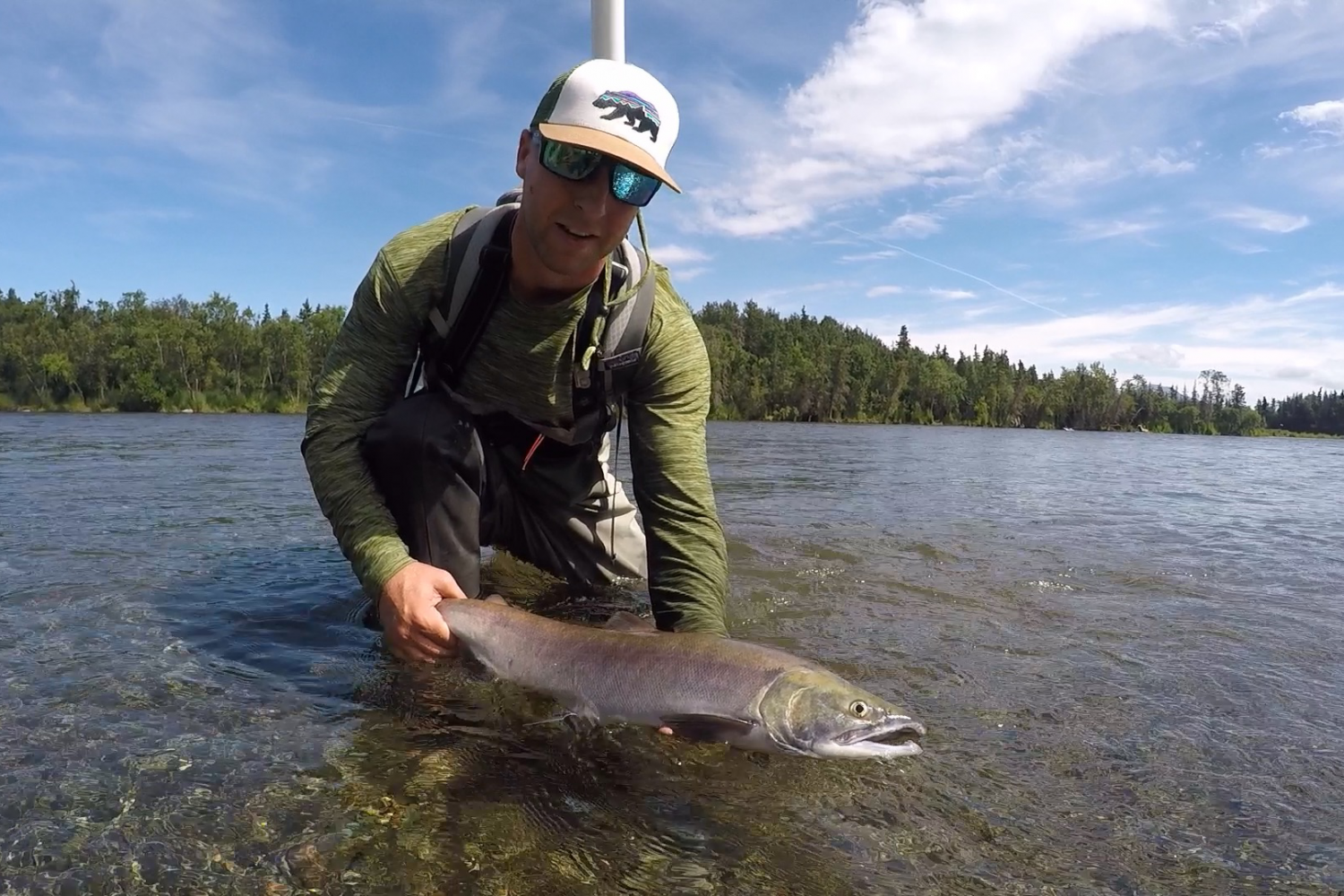 Buckle up and get ready. Brooks Falls is easily the single greatest place I’ve ever fished in my life, and easily one of the places I felt most alive while being so close to death!  Yes, death. And I don’t say that lightly.

I’ve been around the world to some incredible fishing destinations like Cabo, Los Barriles, Maui, the Laurel Lakes and the whole Sierra Nevada region…some truly unreal, humbling locations. But none can compare to Brooks Falls.

Why Brooks Falls is so Iconic

If you’ve ever learned about, heard about, seen, or read anything about bears, I’m sure you’ve seen the iconic poster or photograph of a massive grizzly bear towering out of a foamy white river. His fur is soaked and spiky, and his huge claws easily swat a leaping salmon right out of the air. That, or he catches one in his powerful jaws and devours it on the spot. Behind him is picturesque snow-capped mountains jutting into a blue sky, while perfect conical evergreen trees stand thick and mighty just beyond the river banks.

The shot is so iconic because it’s a sort of natural phenomenon and a true wonder to witness in Katmai National Park and Preserve. The wild salmon population is booming up in this area, and their natural spawning place in Brooks Lake upriver means they have to leap over the 6′ falls. This in itself is a sight to behold, and the booming brown bear population agrees. But they don’t just want to watch; they want to feast. Which makes a wondrous spectacle even more spectacular.

Everyone has seen this quintessential bear + salmon shot. If you haven’t, or if you have and you just love bears so much, Explore.org actually runs a 24/7 live stream of Brooks Falls, where you can catch some bears frolicking in the water and, yes, sometimes catching salmon. Check it out here but WARNING: you can and will get addicted to it:

You can just see the purity of the wilderness; the white foam of the falls pushing back leaping salmon following their innate, natural need to head upriver and spawn. In this singular ecosystem, you have forest and river, predators and prey, as well as white birds fluttering around, uninterested as the world carries on.

I could go on and on about what this place means to me from a spiritual or philosophical perspective, but then I’d never get to the actual story.

My Dance with Death

I was out on the Naknek River, and we didn’t have a guide for the day. So we decided to hop a float plane over to the falls. The plan was to go see some bears and see firsthand something we’d all seen on TV and the internet. But, don’t forget, we’re crazy fish people. So of course we grabbed our rods. “Just in case.”

The float plane took us to a lake not far from the falls. I assumed we’d just walk 100 yards to a platform, see some bears, and be done with it. And then on to fishing.

We took a safety course with one of the guides, and he told us the platform for viewing was about a mile and a half hike away. Well, a quarter mile up the trail head we met up with a park ranger and came upon a bridge to cross the river. We started to walk across, and suddenly a bear appears on the other side! He parked himself right on the bridge and started to nap.

The ranger called us back — we had to wait for him to leave before we could proceed. Since we were next to a river anyways, standing on this little peninsula of sorts, I asked the ranger if I could go off and fish a little. You could just see the salmon swimming everywhere. He said “no problem.”

There was a girl in the group I’d never met, who had never fly-fished. She asked if she could join me and I figured why not. We stepped carefully down to the water and I began to show her the ropes. Five minutes in, I looked back to check on the park ranger and the rest of our group, but they were nowhere to be found. Instead, I see 3 bears coming down the trail to our peninsula. We were sitting ducks.

These were giants. Huge grizzly bears. A grizzly bear can get up to well over 1,000 pounds, and I thought back to the first time I’d come to Alaska down at Kodiak, where as a kid the airport greeted me with a towering brown bear. Let me tell you — even as a grown man, these guys were towering and fearsome.

They proceeded about 30 yards away, and I kept telling the girl to stay calm as she kept freaking out worse and worse. The last thing I wanted was a big scene to attract their attention or worse, spook them.

They hung out by the bridge like some kind of weird fairy tale. They were more interested in playing around and going after salmon, and finally after 10 minutes they wandered off into the bushes. We took that chance to dart over to the bridge, which at least has a locked gate they wouldn’t be able to enter.

As we approached the gate, I’m reaching for the handle, and suddenly I hear a noise. To this day, the hair on my neck stands up and I get chills thinking about it. The snap of breaking branches and leaves whipping out of the underbrush. One of the bears came flying out of the bushes about 40 yards from us, running full tilt at us. Adrenaline kicked in, and I threw this girl onto the bridge and slammed the gate. I looked back and the other two bears had emerged, chasing the first, and they ran right past us. It’s like they were playing a game of tag or something! After they’d gone, I finally got my heart out of my throat, where I thought it had possibly lodged permanently.

We ended up going to the other side because that bear that first bear who’d blocked the path had gone. We walked up to the falls still tense, telling stories and trying to make sense of what had happened. By the time we got to the falls, we had a 45 minute wait to the platform, but my head was reeling. How could the tame view from an observation platform even compare to what we’d just experienced firsthand?

We walked to another area that overlooks the river, not far down from the platform, and I noticed two fisherman in the water. I couldn’t help myself; I could see sockeye salmon, trout, pink salmon everywhere in this river. She told me it wouldn’t be safe, but I figured those guys were doing it and so could I. After all, I’d already stared down a bear once today.

I started fishing and hooked up to a sockeye, and not long after the girl says she doesn’t feel safe up there alone! She came down, and we ended up fishing while she sat right on the edge of the bank. Every once in awhile a bear would meander out of the woods somewhere down the way and freak us all out, but you could tell they were also more interested in the fish. Something the bears and I had in common!

Thirty minutes in, I’d caught some sockeye, lost some rainbows, and noticed the rest of our group had finally made it up. We met up with them, and the rest of the guys joined in fishing. We had a ball catching sockeye salmon in this river amongst no less than 50 bears. It was crazy. We’d be focusing on a fish and then look up to see a bear 20 yards away staring at us. He was probably thinking, “These guys are trying to take my fish. Should I take that guy’s fish?”

Luckily there are so many fish out there, the bears truly don’t care about humans. Everyone’s just out for themselves – man and bear -and there’s plenty to go around. They’re just catching them, ripping off the flesh, and throwing back the carcasses.

We have so many pictures of hooking fish, with stunning background loaded with bears. I don’t know if anything can ever compare. My friend put it best — it was like going to a zoo but actually being in the enclosure. It goes against everything you’re ever taught as a kid, but weirdly you adjust to the danger and it becomes normal. You wonder how it can be safe, how rangers can allow it, how people can camp there and fish there, but it all works.

We flew back later on a float plane and I think everyone was dazed. It was just a perfect day of fishing and adventure, and we made it out with our lives to tell the tale…bear-ly.

PS – This was a doozy of a story to tell, but there was another chapter that just didn’t fit here. Check out Brooks Lake if you’re interested in more about this incredible part of Alaska.