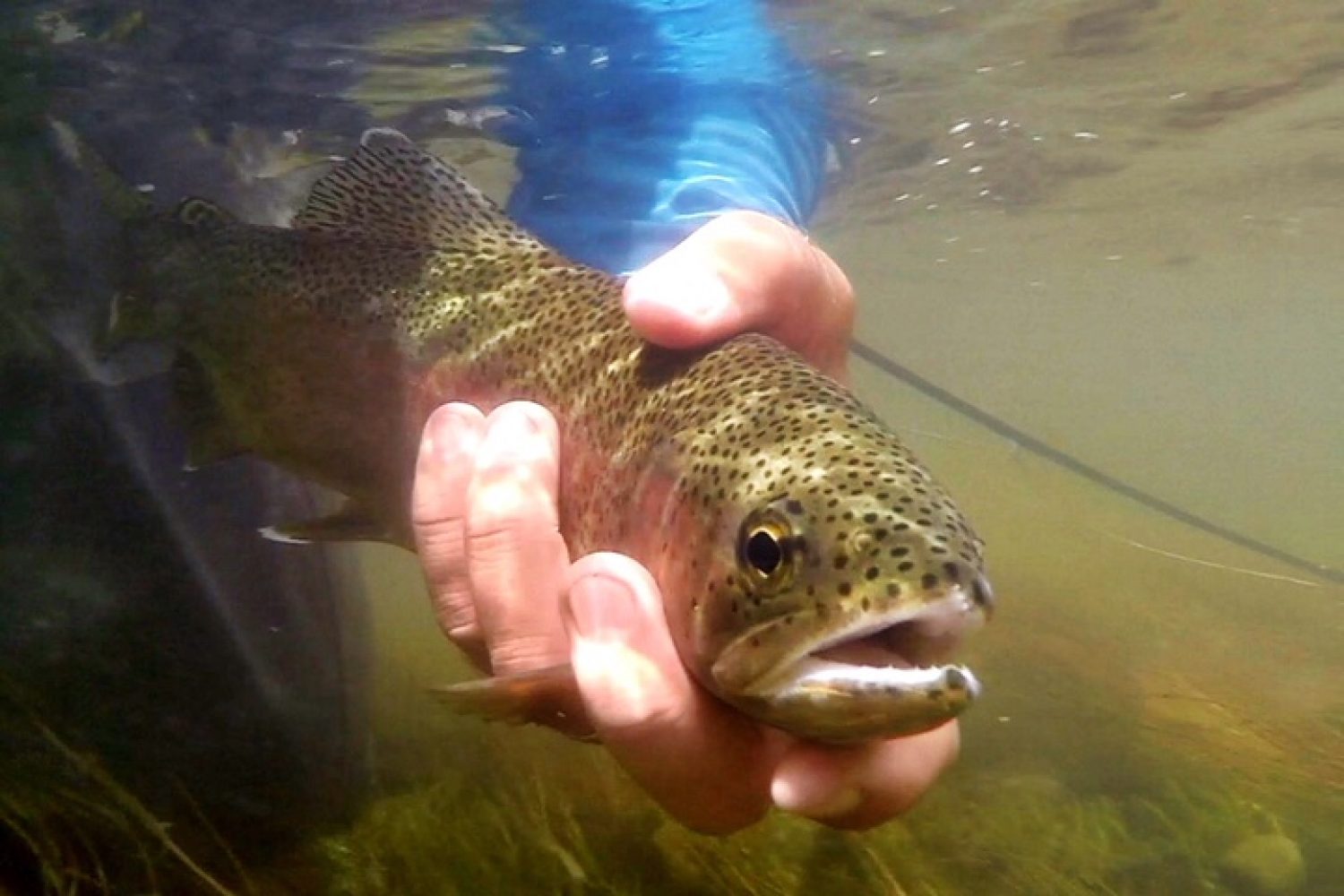 If you had to pigeonhole fishing as one thing, most people would agree it’s an escape. I’m not saying you should pigeonhole it, mind you, but if you did, it’s definitely a getaway. When I was a poor, wild college boy at the University of Kentucky, there was no more magical place than Grimes Mill Farm out in Boone’s Creek.

Picture this: you walk through thick, wooded trails with beeches and pine trees, dense brush of ferns and ivy, while in the distance you can hear the soft bubbling of water, calling to you. You follow it, trampling through woods with a buddy or two, laughing and telling jokes, breathing in the earthy smells, stepping over tree roots. The sound of moving water gets louder, and the trail opens up at a skinny creek with crystal clear water. It’s like discovering America all over again.

Further downstream, that creek feeds the original mill house Grimes MIll was named for. There’s a winery and tasting room out there now, along with the original house and farm, but out here in the forest is just leafy canopies and these towering limestone cliffs, like walls of a castle out of the very best childhood dream.

I’d first learned about Grimes Mill Farm from one of my fraternity brothers. We got to chatting about local fishing holes, and he told me about this secret spot out in Boone’s Creek. I’ll never forget that first time we went out to explore it; I caught some large rainbow trout on the fly, on hoppers, and all around me these tiny little waterfalls just flowed magically off the white-striped limestone. It was magical

So magical, in fact, that we kept coming back. It was remote, close enough that we were never totally sure if we were allowed to fish there, but far enough removed that we never really cared. It was the best kept secret, with no intruders around except the deer, turkey, and bustling wildlife of the forest, and the rainbow and brown trout in the creek. I came to love that place and escaped whenever I could, leaving class and studies behind. It was perfect…

…until I opened my mouth.

At the end of my sophomore year I went out to a bar with a few buddies, as we typically did. We met some guys from another fraternity and got to shootin’ the shit with them, having some drinks, and as expected got to talking about fishing. My lips were a bit loose at this point, and I plunged into telling this stranger about Lexington’s best kept secret — this really special place, great trout spot, unbelievable in every way. Well, he let me run my mouth until I had laid it all out there, and he waited patiently taking drinks from his beer, until finally he spoke up.

Hell yes I was! Of course! And then he shattered my excitement like a dart to a balloon:

“That’s my family’s property. You can’t fish back there!” We were busted!

Before I could even process the thought of losing this sacred spot, let alone the thought of trespassing charges, he started laughing! I smiled and laughed along with him, and just like that we became friends.

He showed me a deeper side of that lush green part of Boone’s Creek, one I didn’t think could possibly exist. There were phenomenal fly fishing spots upstream, areas where bigger fish had swum up from downstream where a fishing club stocked the waters each year. We camped overnight out there, shivering in sleeping bags while the temperatures around us dropped below freezing, but we were crazy, we were in college, and we just loved fishing.

We never saw another soul while we were out there, deep in his family’s property, but a place like that is steeped in ancient history, and we weren’t exactly alone. We’d sit out there fishing, swapping ghost stories between catches, or stumbling across these old artifacts from the days of the native Iroquois, Irish immigrants, and southern slavery. The past was all around us, in the mist rising up off the clear waters, and the rainfall that made the creek run muddy brown. It trickled off the limestone cliffs and ran through the water, drop by drop.

Now that I can’t get back there as much, I guess my time in Boone’s Creek is tied into history, too. My buddy’s family sold the property, but not before he married the love of his life out there, surrounded by the timeless forest and the slow-moving waters that gave us massive trout on the fly, sometimes 25” or bigger.

I’m left with the memories we had out there, and the memory of grilling up the daily catch for dinner — one of the most unbelievably satisfying meals imaginable for a starving college kid. It was truly a gem, and if I listen closely when I close my eyes, I think I can still hear the soft sound of moving water and the quiet rush of waterfalls cascading down the limestone cliffs.