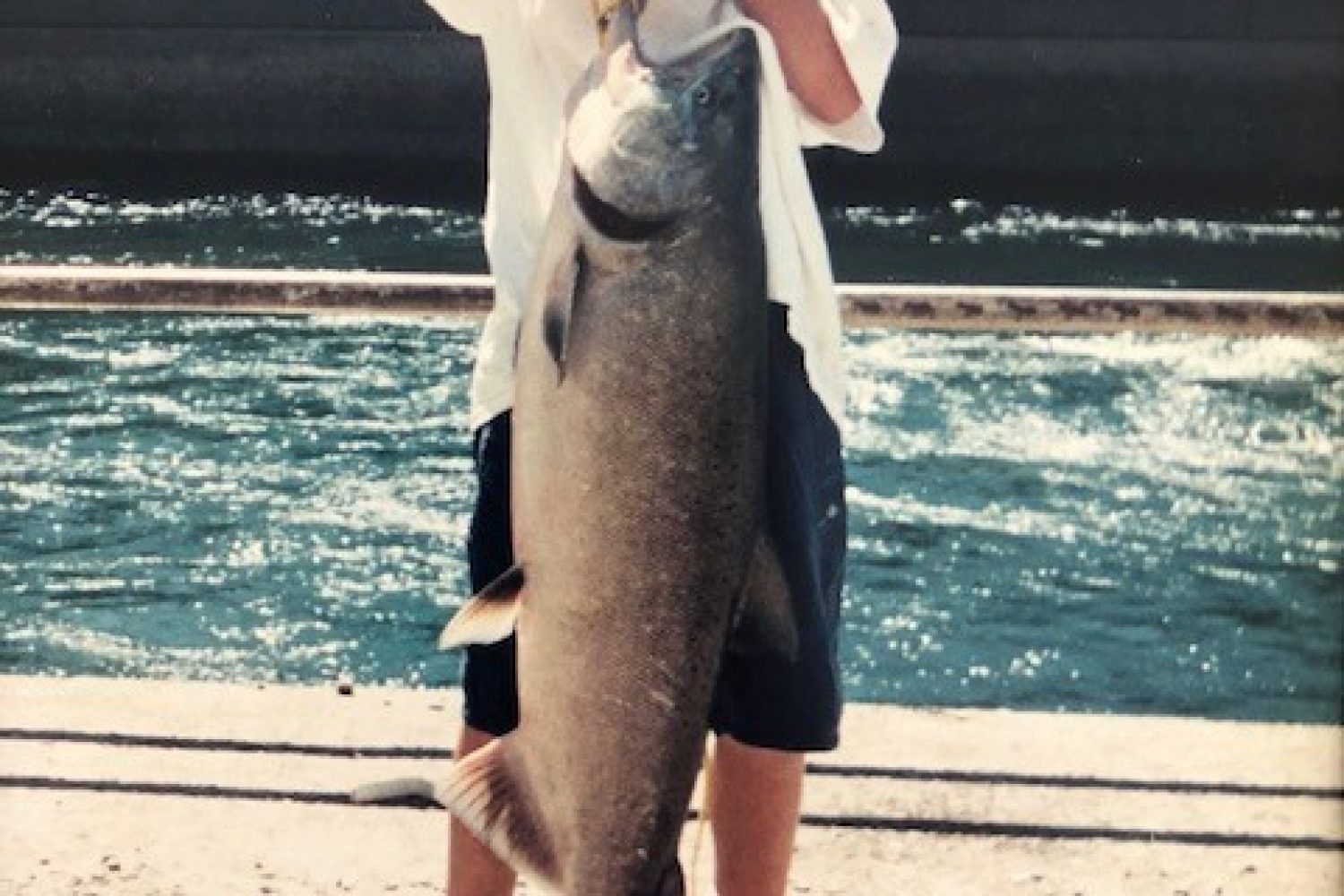 Salmon fishing on the American River

No matter how many times I say that fishing is a perfect metaphor for the American Dream, it’ll never be more true than salmon fishing on the aptly named American River. At age 11, just a pint-sized would-be fisherman, I was only 4’6” or so. But on that day, I stood as tall as any legend.

This day at the American River is one I point back to as “formative.” By that I mean it cemented my passion and addiction for fishing. Not only did I catch a fish nearly half as big as me, but I was a celebrated hero. The envy of my friends. A prodigy for locals to gawk and marvel at. A roadside warrior lugging my prey back to our car amidst honks and whistles from admiring fans in passing vehicles.

Back in the Day

Back when I lived in Sacramento, Granite Bay area, I used to always fish with two buddies of mine who were brothers, Brandon and Jason Thatcher. Brandon and I were eleven, and Jason was a bit older at fifteen, which was perfect because back then, age fifteen meant he could legally drive in northern California. And driving meant freedom to explore.

Which is just what we did.

We had heard tall tales and lore of salmon runs up at the American River, where they’d get stopped at the Nimbus Dam and just sort of pile up there, south of Folsom Lake (another adventure for another day). It was supposed to be a great spot for locals to congregate, and we decided to check it out for ourselves.

As kids, we were limited by what little money we could earn and what little we could pinch and save up from allowances if we’d done all our chores. With what we had, we pooled our money and bought a bunch of rods, and I got myself a big old ugly stick and a corsair reel. Talk about American Dream, I must’ve spent every penny I had on that thing, betting it all to chase something greater.

So we piled into the car and Jason drove us down to the American River. We had no idea what to expect, but the anticipation built up as we weaved our way through the Sacramento streets, past Lake Natroma until the suburbs gave way to trees and nature a bit more, and Jason parked the car on the side of the road. The trail down to the damn was long and hilly as all hell, but we hiked fast and made good time.

You could hear the dam before you could see it. The faint roar of falling water, it’s a sound that calls out to people, I think. It’s raw and powerful — it’s very moving. When we finally crested the last hill, suddenly it was right there in front of us, water just gushing and surging through this wall. At eleven, I can’t imagine how easily it would’ve swept me away in its mighty, frothing white waters. Even as I stood there, I knew my mother wouldn’t be happy about it.

But danger pales in the face of adventure. And we had fish to catch.

If you’ve never been to that part of the river near Nimbus Dam, it’s actually kind of funny to imagine how it looks. All the fishermen, guys and gals, sort of lined up on one side of the wall, casting out about 40 yards to the other side. Picture this line-up of grizzled, bearded men, some grungy vagabonds and folks a little more rough around the edges. And then the three of us kids, not even half the size of the smallest man there. But never forget, David beats Goliath.

To have any chance of catching something there, you basically just use a big two-ounce weight with a bead, cast across, and pray a salmon swims between your line and gets snagged in the mouth so you can actually reel it in. After awhile with no luck, Brandon and Jason took a little break to sit back and relax, while I stood out there by myself casting and casting in vain.

I finished my drift and started to reel in my line when all of a sudden, I started feeling a pull.  I thought it was maybe the bottom or somebody else’s line. It was strong. But it soon became apparent that I hooked a fish. Excitement flooded my senses as I started fighting. You know the biggest fish in the world is the one you just haven’t glimpsed yet, but I had a deep certainty that this fella was the real deal.

It was going up current and by the damn and back and forth. An audience grew, as others dropped their poles to gaze on. Finally, the whole crowd got a peek at this fish, and my heart leaped out of my throat. It was about 30 pounds, and it was a beautiful chromed-up salmon. Chrome doesn’t necessarily always happen up there. Usually, with a salmon’s gestation period, by the time they reach the damn they’re kind of red and a little green, worn out, and the meat’s not very good.

But this was more than good. This was a fish right out of the sea, gleaming chrome and beauty.

For half an hour, we fought. I got closer and closer to landing it, until I saw this little, jagged outcrop of the wall and my fish running right towards it. By this time, though, my audience had a stake on the game too — no one wanted me to lose this fish with an easy snap on the wall. In a flash, Brandon jumped over the wall right into about five feet of water, grabbing at this tired, slippery fish and splashing around like a madman.

He grabbed it by the tail and swam over, about ten feet back to the wall, and the crowd erupted in a massive cheer. He stood there dripping, and I was still catching my breath, but we all stared at this fish, mesmerized. It was a 34-pound salmon, beautiful chrome, like something out of a legend. I was only 75-pounds myself. It was comical, in a way.

We all took pictures and hugged, but I could feel the envy from some of the others. Some folks had probably fished their whole lives in that area and never caught a fish like mine. Jason, in particular, felt a little shocked and more than a hint of jealousy (which is a proven fact, given he went on to write this poem about my epic feat!). 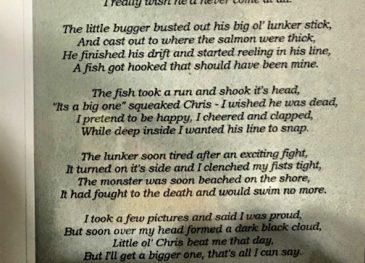 By then, it was getting darker so we called it a day. For me, I was totally fulfilled with my catch. We tied a rope around its tail and to its mouth so we could kind of use it as you’d wrap a bow and arrow around your shoulder. This thing was so heavy walking back up the hill I couldn’t carry it. To add insult to injury, older, bigger Jason got to carry it for me. But only for a short time.

I was a glory hog then, and I wanted all the praise for that fish. It was mine. So as we went up the hill back to the car, there was one stretch along the road. I just remember we got up there and cars were honking and screaming how impressed they were about the big ol’ fish. So, I took it from Jason and lugged it up the hill by myself, huffing and puffing. It probably took me a good fifteen minutes, but it was worth it. Perhaps I was taking my time because everyone was so happy as they honked and drove by.

Of course, we didn’t have cell phones back then, so when we got back to Brandon and Jason’s house, I called my mom and told her to come check out this fish. As she got there, we were cleaning the thing out front, and I remember the look on her face when she got out of the car. Astonishment, mixed with awe and a tint of suspicion. Deep down, she knew that kind of fish wasn’t from anywhere close by. That got her wondering a little bit and asked where we caught it.

Ultimately, we told her. She had to look up where it was, and as predicted she was not too happy about where we’d been fishing. But at that point, she knew there was nothing she could ever do to stop us again. I was rising the tide of the American Dream, after all!

It was one of those things I’ll remember for the rest of my life. The memories are still so vivid even 25 years later, looking back on it, I think the poem kind of tells the tale. What Jason didn’t realize is documenting my feat only served to help the legend live on! And the memories of adventure is really what it’s all about.