A Dream Come True in Miami 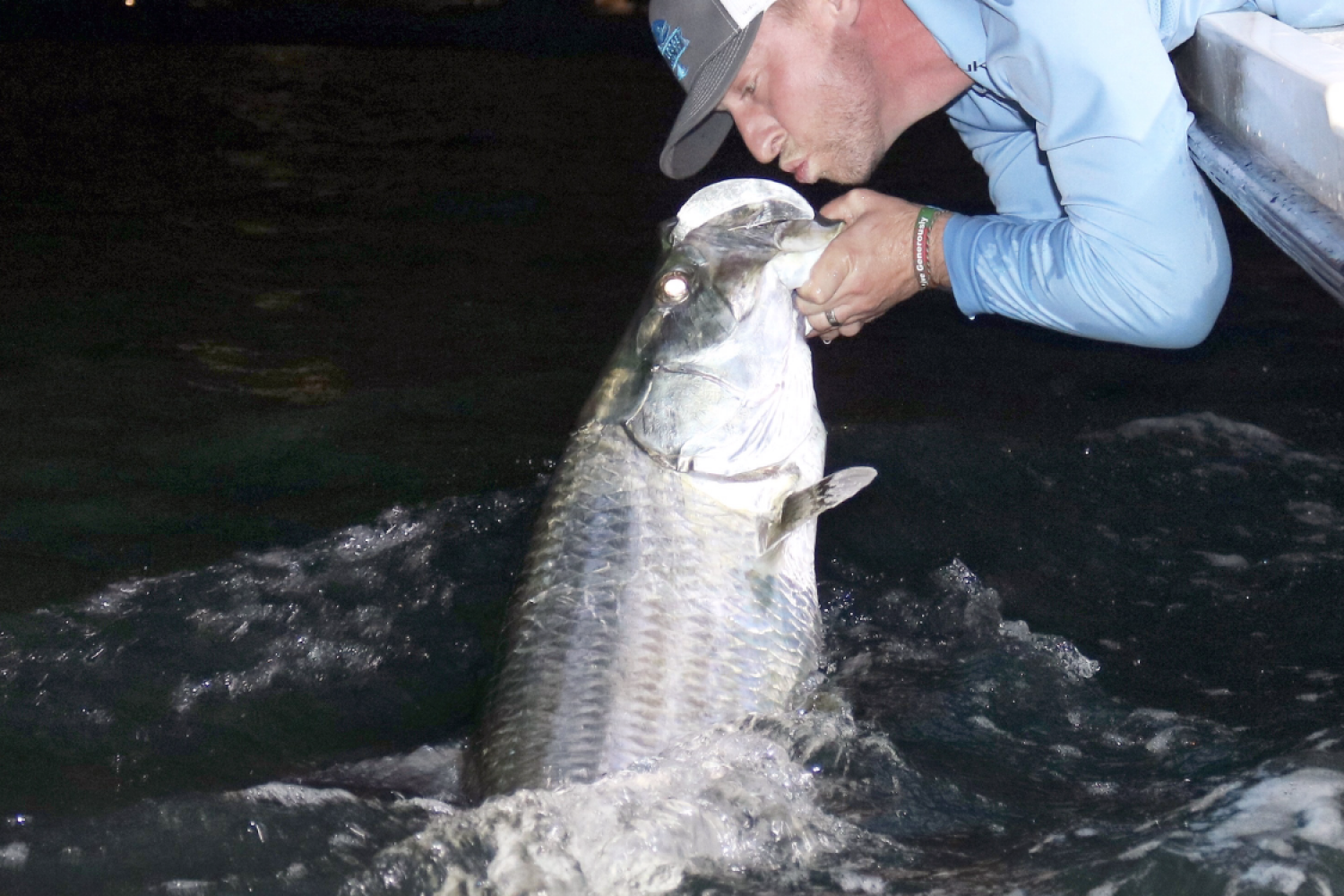 One sentence: tarpon fishing in Miami.

Okay, it’s not even a sentence. It’s like a crazed half-thought running through my mind. You’ll know from my last Miami adventure how desperately I wanted to win a battle with one of these beauties. When I booked a return trip to Miami for business, my mind immediately leapt into the waters of Biscayne Bay.

The whole week leading up to my trip I was antsy. Out here in California, I was just itching like a kid at Christmas, crossing days off my calendar. I had booked a guide like I always do, someone who could take me tarp fishing at night. I refreshed the weather forecast almost obsessively, and everything looked good.

Two days before the trip, it still looked good.

Then the day I’m set to fly out, I receive I text:

Weather looks nasty. Might not be able to fish tomorrow… Stunned, I checked the weather again. It looked awful. My heart sank as I typed a reply: Let’s just see how it goes.

It’s not like the trip was booked solely for fishing. I had work to do anyways, so I lost nothing playing it by ear.

After a miserable day of travel, I got into Miami around 1:00 am and practically crawled into my bed at the hotel. With a 9:00 meeting the next morning, I was looking at just a few hours of sleep. When I awoke at 7:00, I held my breath and looked outside…

25 mph winds, monsoon rain. It didn’t look all that bad. I sent a text:

Back on the Water

The workday was grueling just waiting to get outside and try my luck again. I met up with the guide just after a quick dinner and we started the day with a little warm-up of sorts, fishing for peacock bass. These suckers are colorful, originally native to the Amazon, and I’d never fished for them before.

It ended up being a really unique and cool experience to kickoff the evening. After catching a few of them, it gave the night a special feeling. And even though my mind was still racing through the waters below, thinking about tarp, the peacock bass helped me slip into a relaxed rhythm.

In other words, I was ready.

We jumped in the truck and headed towards the ocean, where the tarp are typically more active. The weather hadn’t totally cleared up, and we hit a little downpour while driving. For a moment, I thought the whole plan was sunk. But through the rapid windshield-wipers and block of gray clouds, I thought I could see the tiniest ray of light.

The wind died down. The clouds broke apart. We looked at each other and started laughing as excitement filled us up. The weather cleared completely, and by the time we got down to the boat we were standing in one of the freshest, most amazingly beautiful Miami evenings.

I felt the boat rock underfoot as we got the gear aboard, and I settled into my seat as we cut through the waters. I had a date with some tarp.

Lines in the Water, and a Line or Two About Tarp

You’re probably like me. It’s nice that it was a beautiful, stunning evening, and it was nice that my luck cleared up. But you want to know about the fish. The frenzy. The fight.

I’d actually been out for tarp with this same guide three times previously, and I’ve hooked more tarp than I can count. Hooking them for me was never the hard part.

So being back out on the water, I felt the same dizzying mix of confidence, battling in my chest with anxiety. There were some lights floating on buoys, and I asked the guide to steer us that way. I’d had luck previously tarping underneath the lights with the flyrod, so it seemed like a good place to start.

And we found some.

At the first light, with my first cast, I hooked one. He took two jumps and got off the line easily.

Another light, another cast; hooked one. He took off, ran around a piling, and snapped the line right off. Just my luck.

We go to a third light. I hooked another one. He jumped twice, bulldogged straight down, and spat out the hook.

Here’s the thing about tarping. The first 90 seconds is crucial. Make or break. It’s total chaos, and odds are if you’re going to lose the fish, that’s when it’ll happen. You have to be so prepared for the moment they hit. You have to have your drag set well. Line out of the way. And frankly you need quite a bit of luck on your side. Sometimes your fortune depends entirely on how close you are to nearby structures, like docks or pilings.

This is all stuff I already knew, and knew well from experience. But even so, I stood there on the boat, washed in lights twinkling from the city back on the shore, and I felt so dark. The weather had cooperated, the trip had come together, and in the blink of an eye I’d lost 3 fish so fast. The rest of the night loomed ahead of me, but instead of excitement I felt crushed by it. I just kept thinking about going home empty-handed. Again.

A Shift in Fortune

The rest of the night was kind of a blur, to be honest. It just sort of melts into this hazy memory, rocking back and forth on the waters and feeling sorry for myself. But the same passion that gets me out there in crazy weather — the same drive that’s taken me all around the world on amazing adventures — it’s like a little pilot light in my chest.

It never goes out. And I never give up.

I’m the guy who will cast for the 115th time after coming up empty the first 114. I doubt I had that many casts that night, but even as the evening was winding down, I was still looking for that glimmer of hope.

And searching for it, I saw a shadow. A silhouette down in the waters, just outside the aura of the lights. I made a few casts in its general direction, but through the murkiness it didn’t look like he budged an inch. Maybe he wasn’t hungry. But why should that stop me from trying one more time?

It was a perfect cast, a shrimp pattern placed neatly right in the back of the dock, right next to the piling. The shadow flinched, just a bit (or maybe I was seeing what my mind wanted to see in the darkness). I gave it a couple strips…held my breath…and then he flew out.

He absolutely annihilated it. In my mind, a countdown clock started immediately. :90….:89….

I set the hook and got good tension right away. And then, as expected, he made a bee-line for the piling. He looped it and did a 180° turn right back towards us. About 30 yards away, he started jumping like crazy, heading right towards the boat!

All we could do was hang on and pray. He hadn’t spat out the hook yet, so my biggest fear was a line break. I let out a bunch of line to let him run, and we took the boat around the piling, in his “footsteps” so to speak.

And it turned into a game of follow the leader. He wrapped another piling, the exact same way as before. Around it quick, then right back towards the boat. So we circled again. And then again. It felt like watching a creature possessed, like the way a bronco bucks and fights right out of the gates. As we followed it around, I thought — of all the tarp I’ve ever hooked, this has to be the worst likelihood to actually land one. It just seemed impossible.

But we stayed with it. We were almost to the 90-second mark. And he started bulldogging. Straight down. For a moment I felt a sense of panic, before it dawned on me: I had the upper hand.

For the first time, I let myself believe that maybe, just maybe, I might win.

We had already gotten a few glimpses of him, and in my mind I could already see our photo together, all 60-70 pounds of him. What a big tarp to catch on the fly. And what a great story it would be, if only….

I’d heard of the :90 second mark, but I wildly underestimated what would come after. For 55 minutes (the guide actually timed it), we chased that fish around more pilings, crab traps, out and back to the ocean, and all around those waters. Lots of jumping, lots of bulldogging, and more near-misses than I thought I could bear.

But finally, out of nowhere, it stopped. We had it. Coolly and casually, the guide just reached into the water and got a hand in his mouth.

And even more miraculous was the setting. I mean the setting of Miami at night, but also the setting of the hook. I expected it to be caught deep, given the tugging and fighting and chasing we’d had all night. But it wasn’t. It slid out like butter.

I felt immediately humble. All the bravado left me. I had no right to catch that fish. It was a gift of fortune, something I’ll forever treasure. When it finally hit me, I slumped back and just sat there, breath by breath, taking it all in. I was totally beat, but I’d won.

There aren’t many days where you leave the water 100% completely satisfied. Usually, it takes an almost-holy combination of factors to leave you totally at peace and fully content. Catching the almost-mythical golden trout back in California was one of the last times I could remember feeling this way, until this night.

I’d flown to Miami three times in search of that fish, and on the fourth I finally conquered it. Under the moonlight with the dark, deep water, I looked back at the big mansions along the coastline. In the richness and warmth of a Miami night, the two of us stood there with this incredible fish.

To be honest, for a moment, I forgot the guide was even there. It was just me and the fish. Five feet long, a majestic animal with big, old eyes, twice the size of human eyes. They looked at me, and I gazed back. My hands rubbed the smooth scales, still icy cold. It was the only way I could say thank you and show my respect for the valiant, enchanting fight.

Back in my hotel room that night, I fell into bed exhausted and satisfied. It was the best night of sleep I had in a long, long time. With each beat of my heart I could see the tarp in my mind, still jumping across the little waves under a waxing Miami moon. Maybe I even dreamed of him that night. It’s hard to say.

After all, I’m a crazy fish guy, and the spirit of that tarp showed me they are some seriously crazy fish. And I’m the one who’s hooked on them, now.